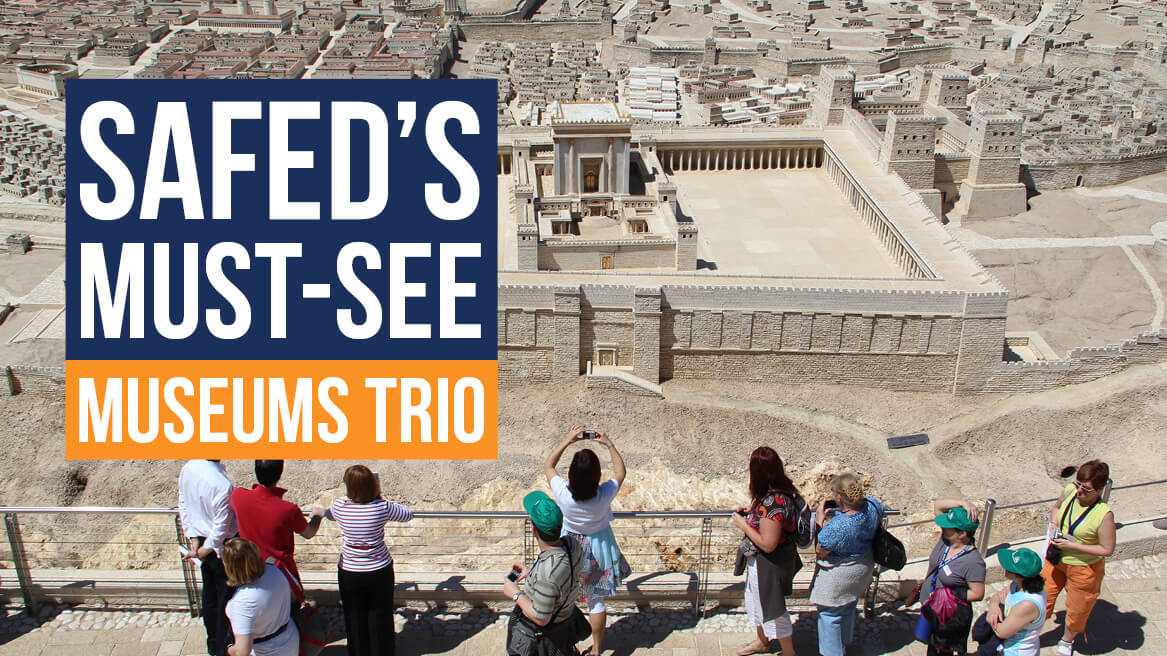 Safed is considered one of Israel’s four holy cities, alongside Jerusalem, Hebron, and Tiberias. Its Old Town is a brilliant gateway to a rich past and culture, with its narrow cobblestone alleys, medieval synagogues, and the famous Artists’ Quarter. In the 16th century, following the Spanish Expulsion, Safed welcomed many Jewish religious scholars and mystics, becoming the spiritual center of the Jewish world, most prominently of Kabbalah (Jewish mysticism). In order to fully experience this city, travelers must explore its history, carefully housed in Safed’s museums.

Situated among fascinating archeological ruins, the Hameiri House is a wonderful historical museum founded by Yehezkel Hameiri (1934-1989), a fifth generation native of Safed.  It documents Jewish life, struggles, and successes in this city over the last two hundred years, but also recreates daily activities and family dwellings so that its visitors could step into the past of Safed’s Jewish community.

Interestingly, each floor tells a different story. The street level contains rooms that are thought to be more than 400 years old, and across the courtyard stands a partially-restored synagogue built by the Hameiri family. There is also a 16th-century mikveh near the living quarters and two large, 150-year-old vaulted halls, which were once part of Safed's rabbinical court, but also housed hundreds of orphans in World War I. When you climb to the museum’s top levels, you’ll find many images of the Safed elders, and numerous artefacts, like utensils and craftsmen's tools. This level leads to what was a schoolyard over a hundred years ago.

In the Reconstructed Room, you’ll see what a typical Safed home used to look like, while the room dedicated to Yehezkel Hameiri contains his numerous documents, newspaper articles, books, and research papers. The Religious Life of Safed section is home to various ritual objects used by this city’s families, while the Heroic Safed houses documents and items from the period until Safed's liberation in 1948.

In a small garden, across the Yigal Allon Cultural Center, stands Safed’s museum dedicated to the lives and heritage of Jewish communities in Hungary, but also in Transylvania, Slovakia, Carpathian-Russia, Bachka, Banat, and Burgenland. Founded in 1986 and opened to the public in 1990, the Museum aims to honor and showcase the contribution of these communities to the Jewish history and world culture. Its goals are to collect, preserve, and display all objects and information that speak of the past, life, and traditions of these communities, while at the same time emphasizing the exhibits with great educational value, which can prompt discussions on issues in contemporary Israeli society. It also promotes inter-generation encounters.

Jewish communities that lived in Hungary for over a millennium were devastated during the Holocaust. That is why the Museum focuses on the lost lives of these Jews in pre-war Hungary and on their resistance during the Occupation. You’ll see there a large variety of documents, an army uniform, handmade lace serviettes, marvelous albums of photographs depicting the daily life of Hungarian Jews, audio and videos recordings, over 600 slides of Hungarian synagogues and a detailed database of what happened to individual buildings, a stunning model of Budapest’s Dohány Great Synagogue, the reconstruction of the Holy Ark from a synagogue in Tokaj in Hungary, and much more. There are also thousands of photos of gravestones from all over Hungary, with information in Hebrew about the gravestones in the Museum's database, which is just one of many ways to trace your Hungarian Jewish family heritage.

Founded in 1972, in a 12th-century building, in what might be the most beautiful location in Safed, the Artists’ Colony, Frenel Museum is another must-see in this fascinating city. As a matter of fact, Yitzhak Frenel (1899-1981) was one of the founders of this Quarter that is home to a gallery dedicated to his work. After the artist’s death, first his wife Ilana and now their two daughters open the gallery daily to visitors.

Frenel is one of the greatest figures in Israeli art. He arrived in Palestine during the Third Aliyah in 1919, joining other young artists in establishing an art cooperative in Jaffa and an artists’ studio in Herzilya. Frenel then left to Paris to study, where he was one of the leading Jewish artists of École de Paris.  Upon his return in 1925, he opened the Histradrut Studio of Painting Arts in Tel Aviv and mentored a number of students, many of which followed him to Safed, where they established the Artists Quarter Association. Frenel made Safed his home in 1934 and never left.

Frenel received many prizes, both in Israel and internationally, while his work is displayed in many museums and private exhibitions in Israel, France, Peru, and the United States. His expressionist works depict inner experience and subjective emotions and responses, while their colors reveal hidden emotions. Frenel was the great-grandson of the Hassidic Master, the Ba’al Shem Tov, and although the artist was not observant, he often painted traditional Jewish life, his pride in the State of Israel, Israel’s landscapes, Jewish rituals, the ancient synagogues, etc.