A Jewish Heritage Tour to Morocco

Morocco is not only one of the best travel destinations in the world, but it is also a perfect place for Jewish heritage travel. From Casablanca’s Jewish community to the Museum of Moroccan Judaism, the colorful and hospitable culture, amazing markets, and spectacular natural travel location have a mix of every ingredient for a magical trip combined with the right ingredients for delicious food, as well.

What does a Jewish heritage trip to Morocco involve?

What your Jewish heritage trip involves is mostly up to you. We cater the trips according to your needs. In general, it’ll be a great opportunity to see synagogues, famous sites, graveyards, and other famous markers of the Jewish community around Morocco.

How does a Jewish heritage tour to Morocco differ from a regular trip to Morocco?

A Jewish heritage tour to Morocco is an opportunity to get to know the country on two levels–as a whole, and how it fits into Jewish history. There are certain locations that are Jewish that a normal tour would not go to, such as synagogues and Jewish cemeteries. 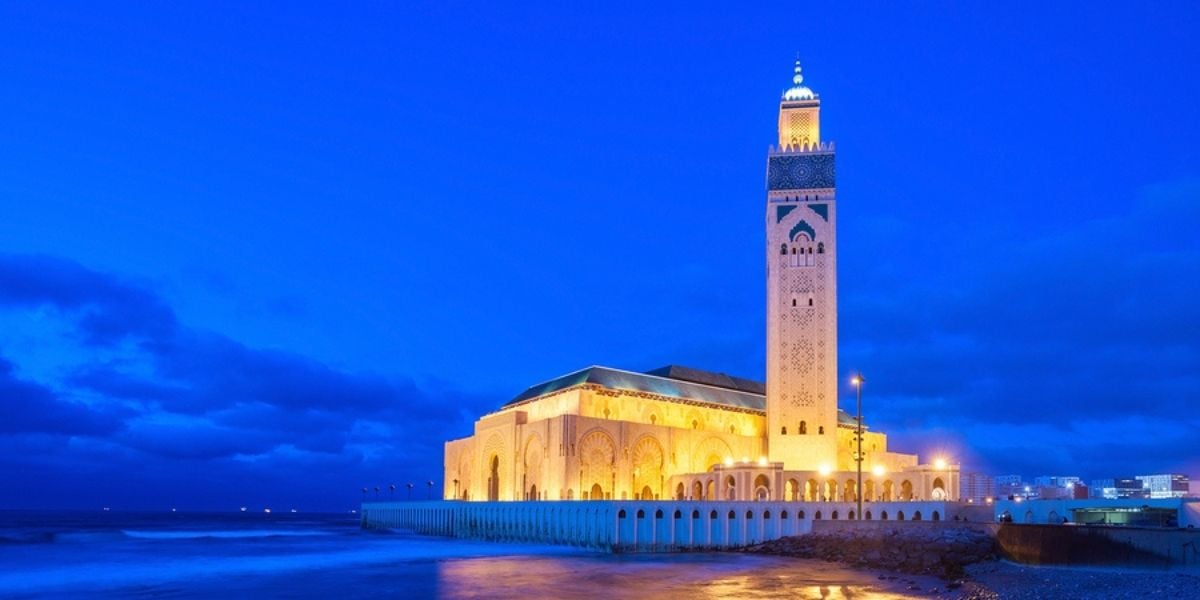 Casablanca is a port city in western Morocco and a great place to include on Jewish Morocco tours. The city is known for Mauresque architecture and the famous Hassan II Mosque that stands over the water and is topped with lasers that are directed toward Mecca.

Yet with a rich Jewish history, you are bound to visit the Jewish quarter, the Temple Beth-El, Ettedgui Synagogue, Temple Habanim & Nev Shalomin in this city as part of any Jewish heritage trip to Morocco.

Additionally, not everything in Casablanca is about Jewish history but there are plenty of great tourist activities, such as general city tours to the Medina, local cousin and food tours, and even sailing rentals.

Lastly, Casablanca, the country’s commercial hub, is famously known to be the home of the Arab world’s only Jewish museum, showing 2,000 years of Jewish history in the region. And, fun fact, to this day the Jewish community in Casablanca is the largest Jewish population in Morocco.

Meknes is one of the four Imperial Cities of Morocco. It’s the sixth-largest populated city in the and a UNESCO World Heritage Site. Here, visit the King’s Tomb, the Bab el Mansour, and the Place El Hedim.

But where do you go on a Jewish heritage tour to Meknes in Morocco? This beautiful city has plenty of Jewish history to explore on Jewish trips to Morocco. The city has several synagogues and a community center and is home to about 100 Jews to this day. Some sites you might visit on a Jewish heritage tour here are Volubilis, Moulay Idriss Zehoun, or Azjen, which many Jewish people visit on Lag B’ Omer.

There’s a beautiful synagogue called El Krief and an old Jewish Cemetery where Haim Messas, Raphael Berdugo, and David Boussidan are buried. There’s a tomb of Moulay Ishmael in the Royal city that memorializes the sultan who protected the Jews in the Moroccan empire.

These are all great places to go on a Jewish heritage tour to Morocco or on a Jewish walking tour around the city. It’s the perfect place to go if you’re searching for cultural journeys.

Marrakesh A Beautiful Stop For A Jewish Tour 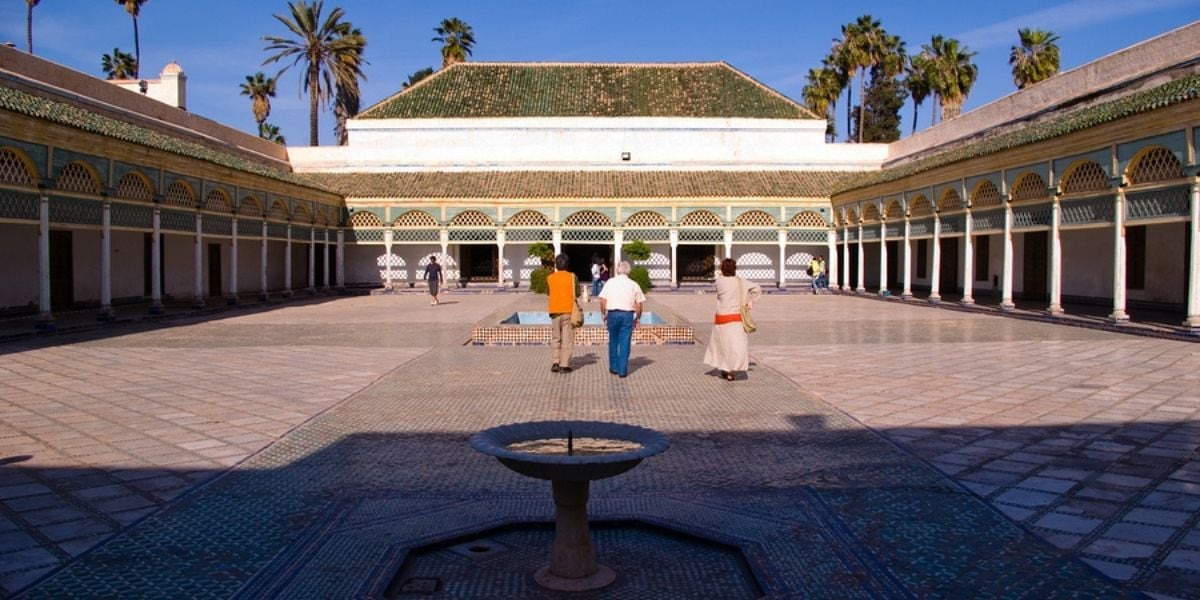 If you want bath houses and souks to find beautiful textiles, as well as cobblestone streets and a citadel, Marrakesh is the right city to go to. See folk dancers and snake charmers, or try some of the local street foods. Visit Bahia Palace and Le Jardin Secret for mosaics, gardens, and courtyards.

This city is known for its beautiful palaces, mosques, and museums, but what makes it really special is how much Moroccan Jewish history exists in this location. Marrakech is filled with Jewish sites, such as the Ben Attar gate, the Miara Cemetery, the Slat Al Azama synagogue, the Dar El Bacha Musee des Confluences, and a kosher restaurant called Dar Ima.

The Medina is the Jewel of the city, a walled settlement of narrow streets and souks, that even had a Jewish quarter for many years. Take a long walk around the Jewish Quarter and get to know what life would have been like when it was filled with Jewish people.

Fez used to be known for its wealth of knowledge. Everyone from philosophers to scholars to mathematicians and lawyers visited the city. The city declined in influence in the 1800s, but it is still an important location to visit for its cultural and spiritual heritage.

The urban area is car-free, so travelers can still see donkeys walking down alleyways and other things that haven’t been common for decades. Visit the Royal Palace and the Jnan Sabil gardens, or walk through the medina and step back in time.

Fez is an important place for Jewish heritage tours to Morocco because it is home to Morocco’s first segregated Jewish quarter. There are currently no working synagogues in the city, but there is enough Jewish history to fill a whole day of exploration.

The palace next to the Jewish quarter is where many Jews took shelter during the Pogrom of 1912. There’s a clock tower to visit at the home of Maimonides, and the Roben Ben Sadoun Synagogue. 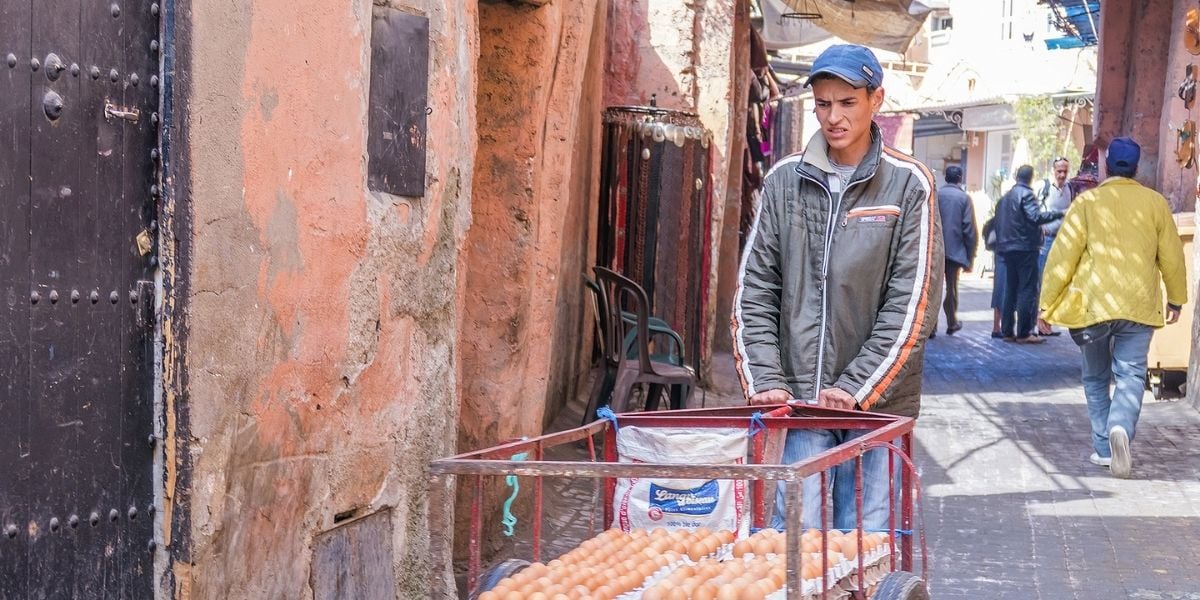 Sefrou is a relaxing stop on a Morocco trip, but one that can’t be missed. Visit the Mausoleum of Sidi Ali Bosrgin for views of the city, or wander to the abandoned French military base. The ancient fountain of Lalla Rekia is said to be healing, but it will mostly hydrate you on a hot Morocco day.

But Sefrou is also a great location on a Jewish heritage tour in Morocco. It once had such a large population of Jews that it was called Little Jerusalem in Morocco. In the late 1800’s, Jews were half of the population. It has its own host of Jewish sites. Visit the Cave of the Believer, or Kef al Yahudi. It is the assumed burial site of the Prophet Daniel. While you're there, you can also visit another cemetery where other famous Jewish figures are buried.

While most of Sefrou’s Jewish settlers have emigrated to Israel and Europe, the old Mellah, or Jewish quarter, is still standing. Although no longer inhabited by the Jewish community, it is still an interesting stop on a Jewish Morocco tour.

Rabat A Feast For The Eyes

From beautiful gardens to breathtaking architecture, Rabat is a feast for the eyes. Visit a necropolis from the time of the Merinids and walk among the beautiful parks in this eco-responsible capital. Rabat is on the beach and has great modern infrastructure. If you’re looking for modern Morocco, Rabat is home to a tram, airport, cafes, and restaurants.

Rabat is also a hub of music festivals, like Mawazine and Jazz au Chellah.

Speaking of Chellah, this location is also connected to the Jewish history of this city.

Jews lived outside the walls of Rabat in Chellah since the time of the Phoenicians, making this a great place for heritage tours to Morocco. There’s even a site for Jews at the Mausoleum of King Mohammed V, who defended the Jewish community against the anti-semitic policies of the French Vichy Government.

Inside the Jewish quarter, visit a beautiful synagogue or the Oudayas Kasbah, home of pirates, Portuguese Jews who converted to Christianity during the Inquisition. Eliezer de Avila and Chalom Zaoui are buried in the Jewish Cemetery nearby, and a museum a few kilometers north of Rabat called the Belghazi museum is home to a large collection of Moroccan Judaica.

Special Places To include On A Heritage Jewish Tour In Morocco

No Jewish tour to Morocco is complete without a trip to the Museum of Moroccan Judaism. The museum shows the history of the Moroccan Jewish community, the largest Jewish community in the Muslim world until the past few decades. Today there are fewer than 2,500 Jews in the country. The only museum of Judaism in the Arab World, the building was a Jewish orphanage that housed around 160 Jewish youth.

The museum is located in the Oasis neighborhood of Casablanca. It has three exhibition rooms with ritual objects, costumes, historic documents, and jewelry, as well as reconstructions of Moroccan synagogues and a multipurpose room with paintings and photographs of Jewish life in Morocco.

One of the most interesting parts of the museum is the collection of items from Jewish Berber history, including Jewelry, costumes, and other items.

This synagogue in the Jewish Quarter of Tangier is one of the most beautiful in Morocco. It was inactive until 1994, but in the early 1990s, an effort was made to restore the interior, which is decorated in the Andalusian style with Arabic calligraphy and geometric patterns. It houses an art museum with vintage photos of Tangier, contemporary paintings, and other posters about the history of Tangier.

This synagogue in Fez is one of Morocco’s oldest, from the 17th century. It was once used as a carpet-making workshop and then as a gym, but the beauty of the architectural work remained. In 2011, it was restored and can now be visited to learn about the history of the Jewish people in Fez.

This is one of the most beautiful beaches on earth. Carved red rock formations dot the five-mile-long beach and create natural arches on the cliff that frame the sea. The beach is only open during the day when the tide is low, and swimming is dangerous, but this place is a feast for the eyes and a great spot for paragliders, fishermen, and surfers.

Visit North Africa’s highest mountain range for trekking and outdoor sports. The saw–toothed peaks are a barrier between the Mediterranean climate in the north and the Sahara in the south. This is an ideal location for rafters and kayakers to explore wide limestone walls, as well as for hikers and trekkers.

What To Include On A Jewish Tour To Morocco?

Any type of trip to Morocco is going to be spectacular, whether you’re riding an ATV in the Atlas Mountains or visiting the graves of famous Jewish figures. A Jewish heritage trip to Morocco is special because it’s a way to connect to the country in a much more personal way. It’s a way of discovering how Morocco fits into your own past and peoplehood, and what that looks like today.

Convinced yet to go on a heritage tour of Morocco? Check out the tours our Israel travel agency offers.