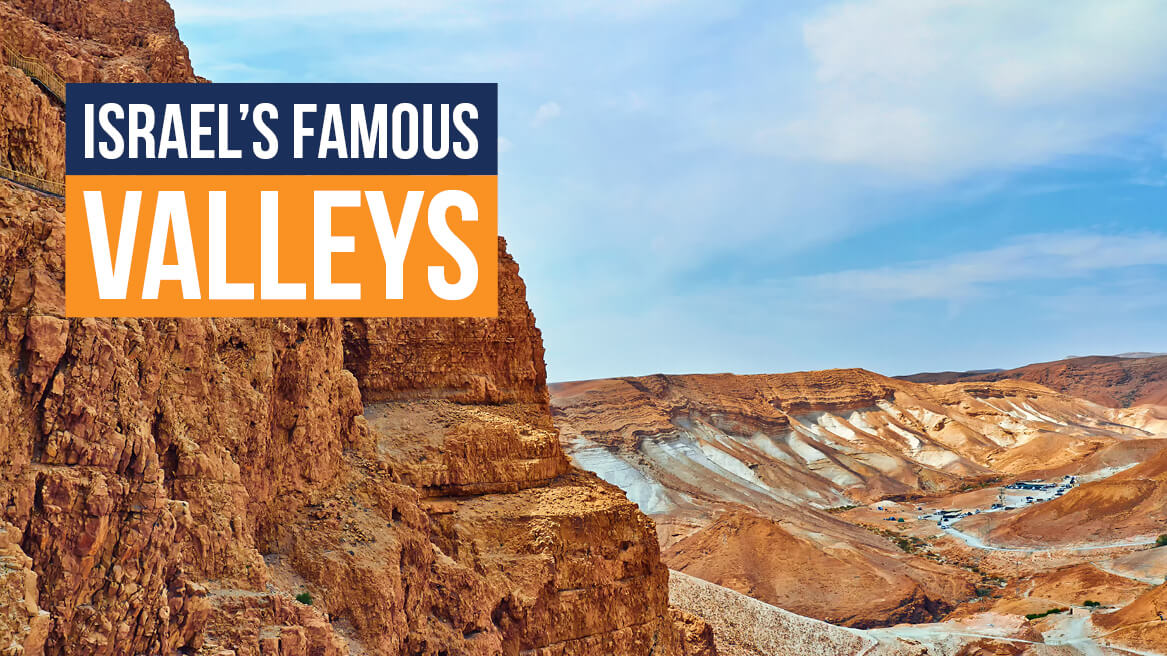 Pretty much everything in Israel is special. Even valleys are not simply valleys. Many of these charming natural areas have both historical and religious importance, and they tell the travelers many vastly interesting stories. There are quite a few truly beautiful valleys to visit, but for this special ‘tour’, we’ve chosen four particularly interesting sites in Israel. Let’s visit each.

The Kidron Valley starts northeast of the Old City of Jerusalem, stretching south-east, between the Temple Mount and the Mount of Olives, through the Judean desert in the West Bank, approaching the settlement of Ovnat, reaching the Dead Sea – descending 1,200m in total during this 32km-long course. The neighborhood of Wadi al-Joz carries the valley's Arabic name, while the settlement Kedar on a ridge above the valley carries its Hebrew name. In the lower part of Kidron, we visit the ancient Mar Saba monastery, while in the upper part, we can see the famous Silwan necropolis, the famous cemetery from the First Temple period with rock-cut tombs from the 9th -7th centuries BCE. That’s not all as there are many surviving monumental tombs here from the Second Temple period, several of which were reused in the Byzantine period, for burial or shelter for hermits and monks who lived in the Kidron Valley. Three of these tombs are among the most prominent landmarks of ancient Jerusalem: Tomb of Absalom, Tomb of Benei Hezir, and Tomb of Zechariah.

Our next destination is a lovely, small valley in Jerusalem, where many say some dark historical and religious chapters were written. It's generally difficult to know the exact location of many sites mentioned in the holy books, but this valley, or a valley such as this, has been heavily referenced in Judaism, Christianity and Islam. In the Hebrew Bible, Tophet or Topheth was a location in Jerusalem in the Gehinnom where worshipers and the kings of Judah burned the children alive as a sacrifice to the gods Moloch and Baal, after which the valley was believed to be cursed. In time, within Christianity, Tophet became a theological/poetic synonym for Hell. Also, Gehenna is a destination of the wicked in the rabbinic literature, while the name for Hell in Islam, Jahannam, comes directly from the word ‘Gehenna’. The contemporary name of the valley surrounding Jerusalem's Old City, including Mount Zion, is the Valley of Hinnom, and it merges with the Kidron Valley.

We’ve traveled to the Northern District of Israel and are now in the large fertile plain, called the Jezreel Valley, but also known as the Valley of Megiddo. We travel to its center, where we find its largest settlement, the city of Afula. Along the way, we learn that the valley was once a very popular route through the Levant, as well as the site of many historical battles, but also that there’ve been settlements here from the c. 5–4th centuries BCE and the Ghassulian culture of the Chalcolithic Age to the 11–13th centuries CE and the Ayyubid periods. Archaeological sites in the Jezreel Valley are still being excavated, while Biblical cities include Jezreel, Megiddo, Beit She'an, Shimron and Afula. Furthermore, according to the Hebrew Bible, the valley was the scene of a victory by the Israelites, while according to 2 Kings, Jehu confronted Jezebel in Jezreel. In Christianity, the part of the valley on which the Battle of Megiddo was fought, known as Armageddon, will be the site of the penultimate battle between good and evil.

From Jezreel, we can choose to go north to the Lower Galilee highlands, south to the Samarian highlands, east to the Jordan Valley, west to the Mount Carmel range, or go to the Mount Gilboa which overlooks the valley, giving us some phenomenal views.

Our final destination is no less beautiful and no less important. This long valley in Israel and the West Bank is called the Valley of Elah, known from the Old Testament as the site where the Israelites were encamped when David fought Goliath. We find here several relevant archaeological sites: we walk through the ancient towns of Azekah and Socho, and we visit the hilltop ruin Adullam, as well as the ruins of the ancient fortress city of Khirbet Qeiyafa from the Iron Age, dated between 1050 and 915 BC. Named after the indigenous, large terebinth trees, the valley is also home to an ancient, 17-meters-tall tree of this kind. From 2019, in the effort to protect the Elah Valley, it’s been overseen by the Israel Nature and Parks Authority.

These four valleys have witnessed millennia of history, and within it, they’ve watched humans developing their cultures, religions, and artistic expression. They’ve seen some of the most awe-inspiring and some of the worst episodes in human existence. And after so much time, they still stand as silent of observers of much more to come, housing the remnants of the past that tell the area’s stories.