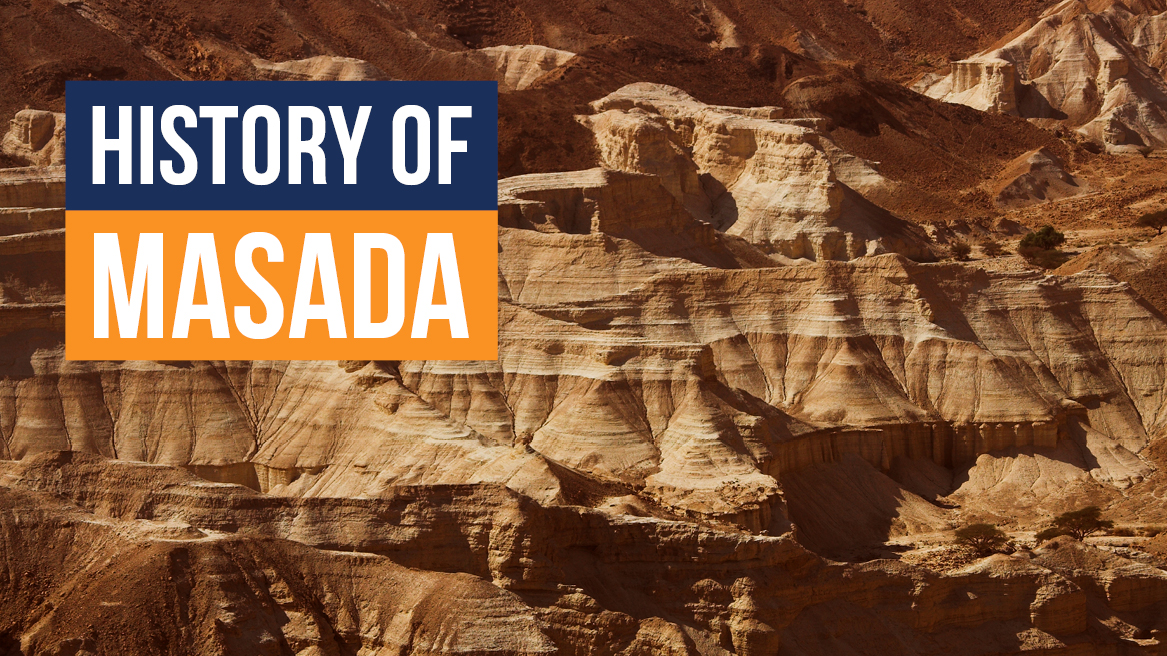 Masada is a site that all the travelers ought to visit at least once in their lives. Regardless if you’re a fan of history, of architecture, ancient stories, ancient religions, archeology, or the most amazing views, Masada has all of that and much more. This stone fortress situated in a desert, on an isolated plateau, is today an Israeli national park, a UNESCO World Heritage Site, and a home to a long, rich and unique history and the lives of the people living 2,000 years ago – their struggles and their accomplishments. Let’s take a closer look.

Where is It and Who is King Herod

To visit this magnificent 840-acre complex, we will now travel to the edge of the Judean desert between Ein Gedi and Mount Sodom, to the mountainous plateau 400 meters above the famous Dead Sea. ‘Masada’ translates from Hebrew to ‘strong foundation / support’, and it’s built on cliffs that consist of chalk, dolomite and marl strata. Interestingly, not only is the cliff barren, but the entire area around this massive creation of nature and humans, is pretty much uninhabited due to the harsh desert climate. You can only imagine the amazing scenery from the top!

Thanks to archeological excavations in combination with the chronicles by a first-century Romano-Jewish historian, born and raised in Jerusalem, called Josephus Flavius, we know today many fascinating stories about Masada. For example, Flavius wrote that the first fort at Masada was built by Hasmoneans, though no remains were found so far.

One man is considered to be vital in the creation of Masada in the last century BCE – Herod the Great. He was King of Judea, who ruled from 37 to 4 BCE. He didn’t originally build this place as a fortress. It was a castle complex with great defensive advantages. But when the Romans attacked and overtook Judea in the 1st century CE, to protect the Jewish people, it was forced to become a fortress.

The Romans annexed Judea, took Masada after the King’s death and built a garrison there. However, the year 66 CE saw the Great Revolt of the Jews, rising against the Romans, and Masada was taken by the Jewish people called the Sicarii, led by Menahem – a group that was antagonistic to Romans as well as other Jewish groups fighting Romans. Menahem was murdered that same year.

Meanwhile, Jerusalem saw great destruction in the 1st century. The chief of the Sicarii, Eleazer Ben Yair, escaped from Jerusalem to Masada, where he lived with less than a thousand Judean rebels. They were now the Roman’s target. A legion of 8,000 soldiers led by Flavius Silva, as well as auxiliary units and Jewish prisoners of war, surrounded the base of Masada for months, building a siege wall, a ramp, and camps. Going for the fortress wall, the Romans built a tower on the ramp, now having the success of overtaking the fortress at the reach of their hands. Ben Yair, however, commanded all to commit a mass suicide so not to become slaves. Another theory is that they killed each other as suicide is forbidden. Only two women and five children survived.

After that, the great Masada saw many more rules, like that of the Byzantine Empire, when the Iaura, a group of monks lived there and built a hermetic cemetery and the steep Rampart Path. But for most of that time, for about 13 centuries, this exquisite place remained uninhabited and forgotten.

Given Masada’s relevance, it was unlikely that it would remain abandoned forever. In the first part of the 19th century, scholars took interest in it, prompting further research, discoveries and mapping over the years. In 1950s, the excavations started, unearthing more and more structures over the decades to come, for them to see the world and for the world to see them after so many centuries of desolation.

In 1966, the site was declared a national park by the Israel Nature and Parks Authority, and in 1977 the popular cable car was installed, so the visitors can either ride or walk to the top. You can also take the cable car down to visit the Dead Sea. Either way, awe-inspiring sites are guaranteed. In 2001, Masada was declared a World Heritage Site.

You will see many architectural remains here, including a palace with an amazing terrace and fantastic views of the desert valley and the Dead Sea, a western palace, a water cistern and a sophisticated water system, a storerooms complex comprised of 29 rooms, Roman bathhouses with frescoes, public pools, dwellings from the Great Revolt, a synagogue from Herod's times, a Byzantine church, and a Byzantine monastic cave.

To modern Israel, Masada is a place of tremendous importance and a symbol of Jewish heroism. Also, as you see, this ancient fortress is a truly unique site that can’t be found anywhere else on this planet. Whether you want to travel to go there alone, book a guided tour, or include it as a part of a tour tailored to your taste, you’re guaranteed the most remarkable time.