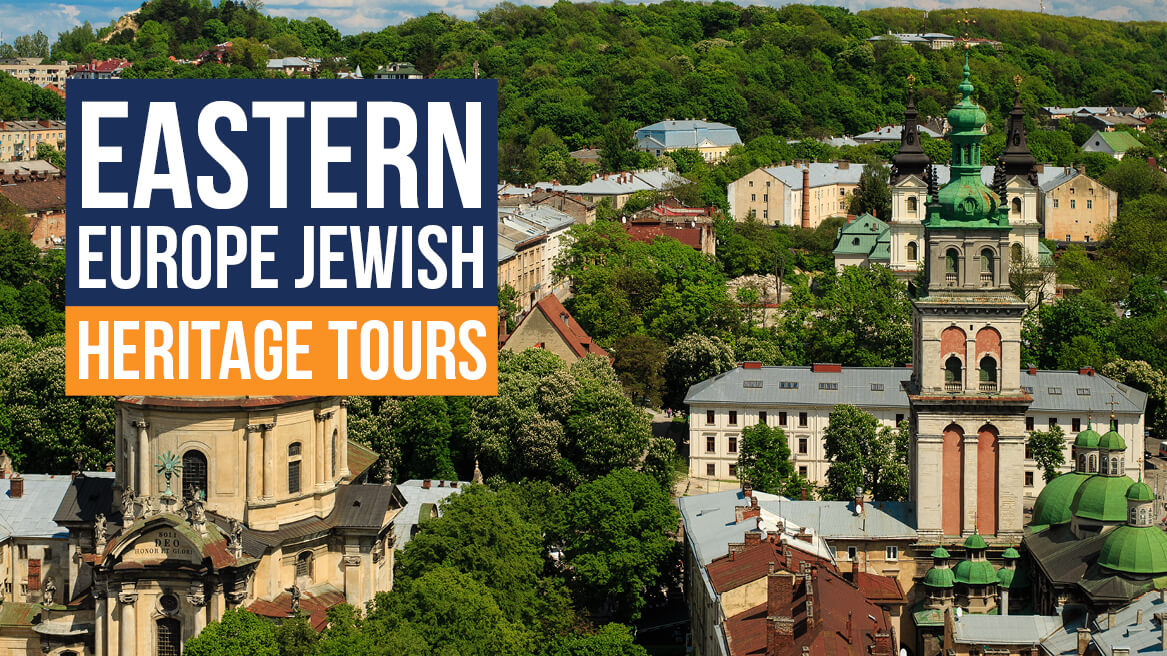 Eastern Europe is a treasure trove of diversity, but also of Jewish history, culture, tradition, and magnificent heritage. In order to experience all this, there are truly many places to visit and numerous carefully crafted tours to choose from. This way you can travel, learn, and walk on the path of Jewish ancestors and the contemporary local Jewish communities. Let’s check out some of the most popular Jewish heritage tours in Eastern Europe.

Jews have been living in Poland for more than a millennium. It was once home to the world’s largest Jewish community.  However, religious conflicts, persecutions of Jews, and finally the German occupation nearly obliterated them. On the site of the 1943 Warsaw Ghetto Uprising, when Jews stood against deportation of the remaining Ghetto population to the Treblinka extermination camp, now stands the Ghetto Heroes Monument and a memorial tablet to the Ghetto Heroes, as well as the POLIN Museum of the History of Polish Jews that treasures Jewish history and culture in Poland. While there, see the remaining section of the original Warsaw Ghetto Wall, built in 1940 for the largest WWII Jewish ghetto in Europe, and the fantastic Nożyk Synagogue, the only surviving synagogue in Warsaw, completed in 1902, which is the center of the local Jewish community and the communal institutions. There is also the wonderful annual Jewish Culture Festival for you to enjoy.

Despite the atrocities committed by the Nazi dictatorship during WWII, Berlin today has the largest Jewish community in Germany, as well as eight synagogues. One of them is the Rykestrasse Synagogue, the largest in the country, built in 1903/1904. While it could seat 2,000 people originally, not it seats around a thousand. It was rededicated in 2007 as an Orthodox synagogue. Your next stop is the Neue Synagoge (New Synagogue), an important architectural monument. Originally seating up to 3,000 people, it was built in 1859–1866 as the main synagogue of the Berlin Jewish community.

There were quite a few concerts held there, including a 1930 violin concert with Albert Einstein, while the religious services with an organ and choir reflected the liberal attitude of the time. Next to this synagogue, you’ll find the Jewish Museum Berlin, which houses collections of Jewish art from various periods, historical artefacts, religious objects, a collection of 24,000 photographs, and letters and diaries of Holocaust victims, while the Academy of the Jewish Museum Berlin is home to the library, archive, and educational programs.

Prague is another must on your Jewish heritage tour of Eastern Europe. First, visit Josefov, the Jewish Quarter located between the Old Town Square and the Vltava River, the history of which began in the 13th century as Jews, expelled from their homes, started settling in the region. The most significant structures survived the destruction, and today they form the Jewish Museum in Prague, Europe’s best-preserved complex of historical Jewish monuments. Also see the Ceremonial Hall of the Prague Jewish Burial Society, built in 1906-08 next to the Old Jewish Cemetery, now a part of the Jewish museum.

Next awe-inspiring stop – the 1270 Old New Synagogue, Josefov’s most famous synagogue, one of the oldest preserved active synagogues, the oldest surviving medieval synagogue of twin-nave design, and one of Prague’s first early Gothic edifices. After that, make sure to visit the Pinkas Synagogue, built in the late Gothic style in 1535, which is a memorial to 78,000 Holocaust victims from Bohemia. Then take a walk to the 1586 Jewish Town Hall, as well as Franz Kafka's Birthplace and his burial site at the New Jewish Cemetery.

A Dalmatian Tour: Dubrovnik and Split

Jewish people called Dalmatia their home since the age of Roman armies in the 1st century. When you go to the lovely Dubrovnik, first visit the 14th-century Dubrovnik Synagogue – the world’s oldest Sephardic synagogue still in use and Europe’s second oldest synagogue. It’s located in the Old Town, in a three-storied Baroque stone building, and it’s owned by the local Jewish community. It’s also a museum, housing old photos, documents, and many valuable items that tell the Jewish history in Dubrovnik, including a 13th-century Moorish carpet and a 13th or14th-century Torah. The Sephardim escaping the Spanish and Portuguese persecutions at the end of the 15th century settled in Split.

The northwest quarter became the Jewish Ghetto in the late-18th century. Walk down a small street called the Jewish Passage and up the stairs, and you’ll find the second oldest continuously used Sephardic Synagogue in the world, established in the early 16th century, attached to the western wall of the Diocletian’s Palace, while the Torah sits inside the Roman wall. On Marjan Hill, overlooking the city, within the walking distance from the city center, rests one of the oldest and largest Jewish cemeteries, dating back to 1573. Today’s Jewish community uses the Jewish section of the municipal cemetery Lovrinac, where you’ll also find a Holocaust memorial.