Why Arava Peace Road is the Perfect Driving Route 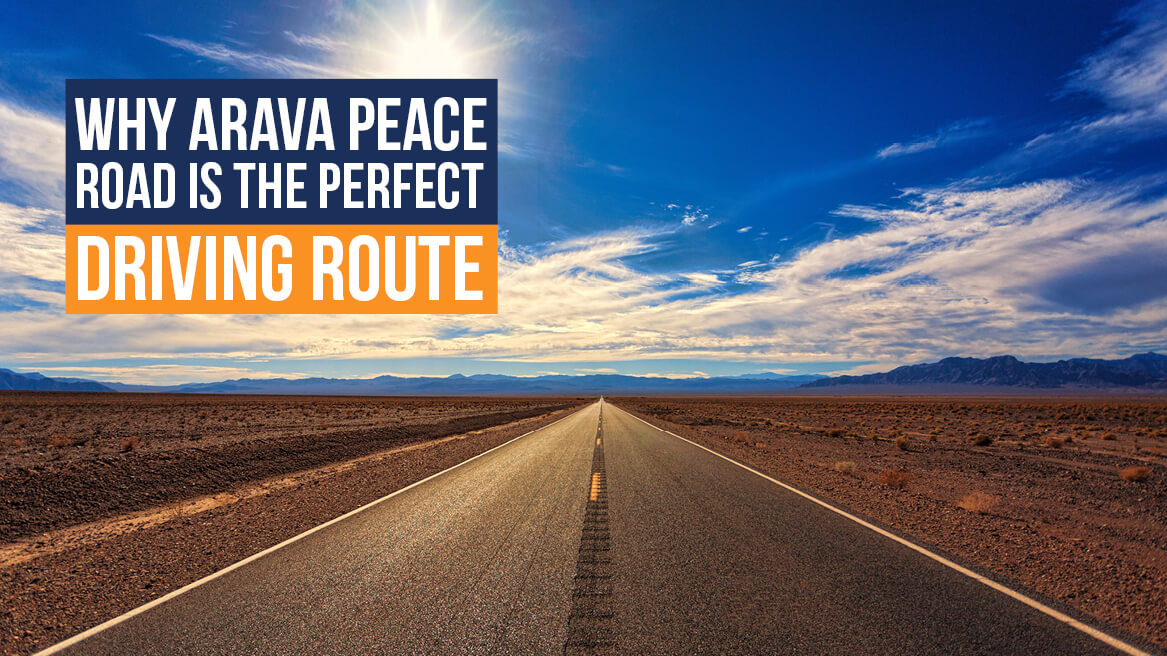 There isn’t a more unique driving route than the one following the border between Israel and Jordan, called the Peace Road. The line between these two countries was drawn in the middle of the Arava streambed in 1922 during the British Mandate. In 1994, during the peace negotiations with Jordan, additional land and water disputes were solved. Today, the road is home to the diverse sites which reflect the history between the countries, as well as the richness of Israel’s natural beauty and local communities. Get ready to see breath-taking landscapes from the lookout points and meet the kind and hardworking farming communities along the way.

Your starting point, though not technically on the Peace Road yet, is already a winner. Moshav Ein Hatzeva was founded in 1960 and became a successful agriculture farm in the dry Arava. You will see here the remains of several fascinating fortresses and installations, which have been dated to the Israelite Kingdom, Nabatean, Roman, and Early Arab periods. Among these, you’ll see what once was a massive fortress, surrounded by a casemate wall with three towers and a four-chamber gate. The excavations have also produced a collection of brilliant ritual vessels from the end of the 7th or the beginning of the 6th centuries BCE. This is far from all you’ll find in this treasure trove of history. The many other structures include the remains of an inn and a bathhouse from the Roman period. You also will find Israel’s largest, famous buckthorn tree between the bathhouse and the fortress.

Next stop is Moshav Idan. Idan was founded by immigrants from Canada, the United States, and South Africa in 1980. You will see a green mark before the entrance to this lovely place, signifying the beginning of the Peace Road. Thanks to the large system of reservoirs and drilled wells, the Arava communities have drinking water and water for agriculture. Approximately half a kilometer east of the Peace Road, you’ll see the Hatzeva reservoir, which was constructed by KKL-JNF (Keren Kayemeth LeIsrael - Jewish National Fund) as part of this system. It actually stores floodwater which is then used for the fields of Moshav Hatzeva. When it’s full, extra water flows down the channel into the Idan reservoir and the Ne’ot Temarim reservoir, used for the fields of the Sedom Plain and for supplementing the groundwater.

Next up – the lovely Peace Lookout, located about a kilometer from the reservoir. The terrace with a pergola roof was built by KKL-JNF to merge with the scenery so that everybody who comes here can enjoy the one-of-a-kind view of the Edom Mountains and the Arava Stream. Walk down a short circular trail to see lissan marl – thick layers of sediment formation exposed when the levels of a prehistoric Lake Lisan (Pleistocene lake) dropped, which existed in the Jordan Rift Valley between 70,000 and 12,000 years before present. It is a chance to explore the fascinating side of this region history.

Moshav Hatzeva is a welcoming place. Founded in 1965, most families there work hard as farmers during winter. One of the thing to see here is the Children’s Grove – a beautiful grove planted by the pioneers, restored by the moshav’s residents. You will see the trees decorated by the signs teaching the reader about a particular tree and their place in legends. To further relax and get lost in the alluring nature, follow the Gidron River, observe it crossing Hatzeva’s cultivated fields, and explore the surroundings. Afterwards, continue down the Peace Road to a small recreation area memorializing Israeli Soldier Oren Lior, killed nearby in 1989, in whose memory, beautiful tamarisk, buckthorn, acacia and palm trees were planted there.

Nearing the end of this enriching journey, it’s time for some more admiration of Israel’s scenery. Pass through a large grove of date palms, and you’ll get to the Arava streambed with its large acacia trees and a huge system of shallow channels. Further on, you’ll be at the Hofira lookout. Similar to other lookouts, KKL-JNF built a terrace with a pergola roof that would nicely blend with its scenic environment. Stand here and take in the fields of Ein Yahav, the Arava Stream, the Edom Mountains, and parts of the Negev. Finally, enter Moshav Ein Yahav, situated 100m below the sea level. Established in 1967 at the current site, it was named after the Yahav Spring located near the moshav. Before ending the journey, explore the nearby Early Bronze Age copper-smelting site, and its recognizable crescent-shaped hill rising above the flat scenery, with blackened northwestern slopes, due to a spill of crushed copper slag. While here, make sure to check out the wonderful artifacts.