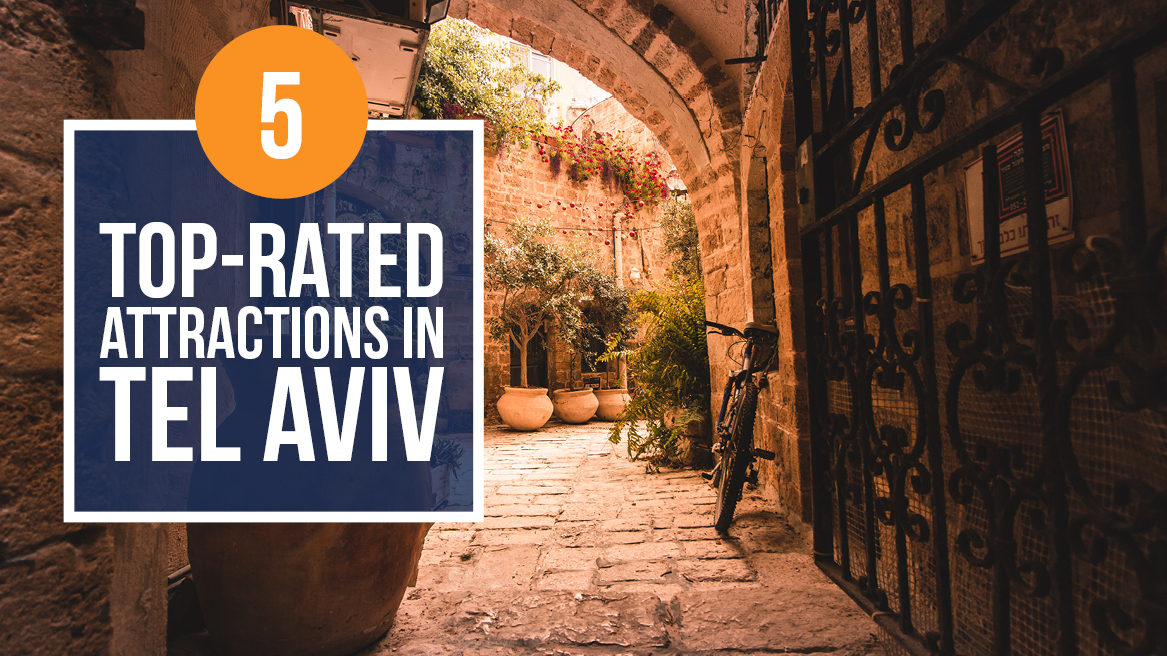 Tel Aviv is without a doubt, not only one of Israel’s most popular cities, but one of the favorite places to visit for travelers from across the globe. This city has it all and welcomes its guests with all it has. We’ll see here great many religious sites, but also museums, theatres, popular art and literary sites, most entertaining of clubs and bars, amazing beaches, and much more. It’s difficult choosing just a few of so many top-rated attractions, but let’s start our Tel Aviv tour with these five.

We will start the day with a trip to one of the most enjoyable and educational places in the city – the Tel Aviv Museum of Art. It was founded in 1932, and it was actually the home of Tel Aviv's first mayor, Meir Dizengoff. In 1959, the Helena Rubinstein Pavilion for Contemporary Art opened, and in 1971 the entire museum was moved to its current location on King Saul Avenue. The 1980s and the 1990s saw the reveal of the Joseph and Rebecca Meyerhoff Art Education Center, the Lola Beer Ebner Sculpture Garden, as well as another wing. The museum expanding means more room for amazing art to be displayed. We’ll see here Israeli classical and contemporary art, as well as brilliant collections belonging to famous artists such as Jacques Lipchitz, Pablo Picasso, and Chaim Soutine, as well as to major art movements such as German Expressionism, Impressionism, Post-Impressionism, Futurism, Russian Constructivism, and many others.

Moving deeper into the heart of Tel Aviv's financial district, between Neve Tzedek and the Habima Theater, we find one of the city’s landmarks and one of its most famous streets. Rothschild Boulevard, is named after Baron Edmond Benjamin James de Rothschild. One of its most recognizable features are the many large buildings built in the unique International Style with Bauhaus components, situated on the sides of the wide, shaded central strip, wonderfully lined with trees, presenting a perfect opportunity for sightseeing. As a matter of fact, the boulevard is a part of the White City of Tel Aviv, a UNESCO World Heritage Site – a collection of more than 4,000 Bauhaus buildings from the 1930s. Also, while walking down the boulevard, we’ll see the Independence Hall and Rothschild’s home.

Now we’ll go to a famous, fashionable and affluent neighborhood in southwestern Tel Aviv, established all the way back in 1887, with many famous people calling it their home since. Actually, Neve Tzedek was the first Jewish neighborhood built outside Jaffa. Though it went through a rough period, the last few decades saw its revival, with the return of boutique hotels, artists' studios, trendy shops, restaurants and cafes, and with new institutions moving into the old buildings, such as the popular Nachum Gutman Museum and the Suzanne Dellal Centre for Dance and Theatre. Established in 1989, Suzanne Dellal Centre is a respected and awarded center of art and dance, and home to the Batsheva Dance Company, Inbal Dance Theatre, and the Inbal Pinto and Avshalom Pollak Dance Company. It gives hundreds of diverse performances yearly, but also hosts festivals, events, workshops and programs for dance artists.

Chaim Nachman Bialik (1873–1934) was Israel’s immensely relevant national poet. Because he was writing in Hebrew, he actually contributed, not only to the revival of the Hebrew language itself, but also to creating Modern Hebrew poetry. He built a house in this street that was named after him while the great poet still lived. Soon enough, the house became such a popular landmark that even the owner decided to move out. We will visit this major piece of the country’s history and culture, which is now a museum, and see its celebrated architectural mixture of Oriental and European elements, as well as the interior in the Arts and Crafts style. Furthermore, we’ll walk down the Bialik Street and see many relevant edifices, such as the Bauhaus Foundation Museum and the old City Hall, now the Museum of History of Tel Aviv-Jaffa. From here, we can also take a short drive to the Tel Aviv beach.

Situated along the Mediterranean seashore, the Tayelet or ‘the Promenade’ is our last attraction for today. It was built back in the late 1930s, stretching from Bograshov Beach to today’s Jerusalem Beach, in order to separate swimming areas from hiking or promenading paths. It’s actually made of six sections, and depending on the section, you can find there bathing beaches, many lovely cafes, restaurants, bars, and shops, as well as sculptures and memorial plaques. Simply said: a perfect ending of a perfect day.

As you can see, Tel Aviv is a vibrant, energetic place, full of life, all day and all night long. Be it culture and art you’re looking for, history and tradition, exciting adventures, lively nightlife, anything else or all of it, Tel Aviv is certainly a place for you.