Jerusalem is a very popular attraction for tourists who want to explore the Holy Land and learn about Biblical sites and history- but it isn’t the only location in Israel with Biblical significance! In southern Israel, there are several locations where travelers will not only be awed by the region’s beauty, but also learn about life in cities and other locations mentioned in the Bible.

, via flickr
This coastal city is one of the oldest known sea ports – its history dates back to the Bronze Age, some sources say. In biblical times, Ashkelon was one of the chief cities of the Philistines. They were: Ashkelon, Gath, Gaza and Ekmor. Askhelon was assigned to the tribe of Judah, and over the years, the city was captured and overtaken many times by different groups of people. As the city stands today, there are six national parks and forests nearby, and several other biblical sites to explore.[/box]

, via flickr
In the Bible, Be’er Sheva, which is also referred to as Be’er Sheba, was the symbol of the southern boundary of Israel. The Book of Genesis, chapters 21 and 25 first mention the location as the site of God’s revelations to the patriarchs. Southeast of Tel Aviv, this city is one of the largest in the Negev Desert. Tel Be’er Sheva is the archaeological site near the city that illustrates part of the city’s long and storied history. The sixth largest city in Israel, Be’er Sheva is home to Ben Gurion University. According to the Jewish Virtual Library, a large portion of Be’er Shea was excavated between 1969-1976, when remains of fortified towns from the early Israelite period and the period of Judah were uncovered. The oldest remains came from the 11th and 12th centuries B.C., and a 20-meter deep well that supplied fresh water to the settlement of the Israelites of the Tribe of Simon, as first noted in the Book of Joshua, Chapter 19.[/box]

, via flickr
Halfway between Hebron and Halhul is Mamre. It is there that the Bible says Abraham set up his tents, built an altar to pray and learned of Sarah’s pregnancy with Isaac. Mamre is also referred to as the Terebinths of Mamre the Amorite. Mamre was one of the chiefs who helped to save Lot after he was kidnapped. This biblical site had been closed to Jews from 1999 on, but in 2010, it was reopened to Jewish visitors.[/box]

With all there is to see and do in the modern cities of southern Israel and the historical sites to explore, it may be overwhelming to try and create an itinerary that includes everything you want to do during your visit to Israel.

to find out how our expert travel agents can structure your trip to highlight the biblical sites of southern Israel.

For more biblical sites in Israel, click below to download our guide to select churches off the beaten trail. 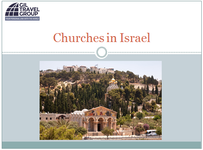