Prague in the Winter 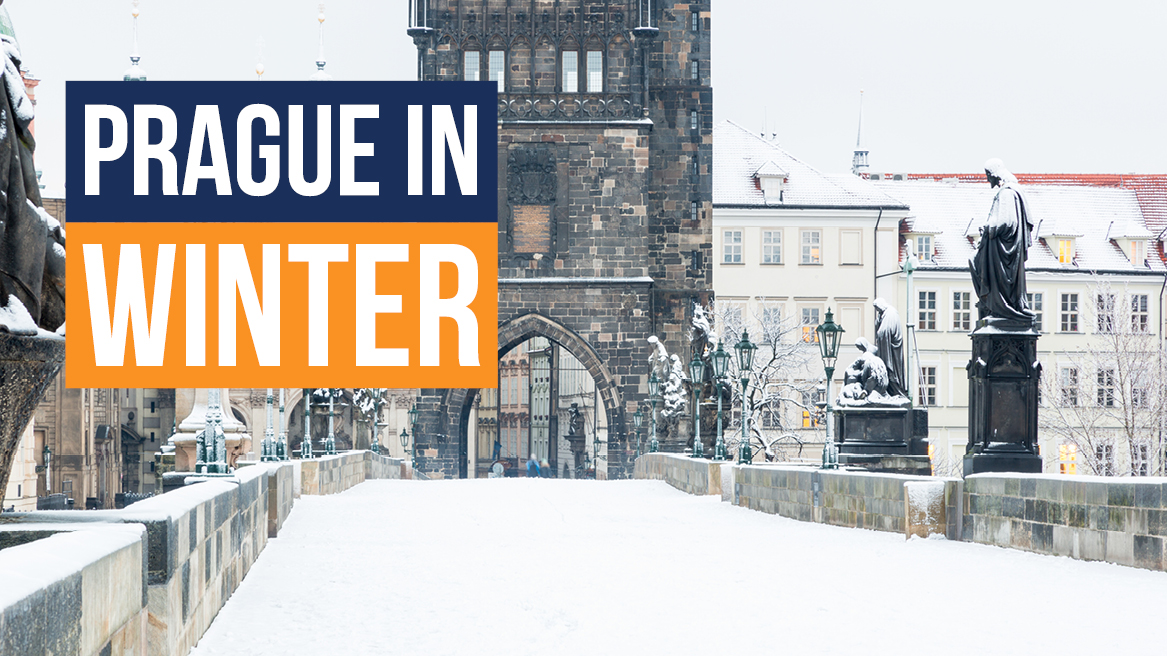 There is absolutely no such thing as a bad time to visit Prague. Though some people prefer warmer weather over winter, it’s undeniable that this city, with its old European charm, becomes simply magical when covered in snow and lights, and the air fills with the smell of winter delicacies, cakes, and traditional beverages. There are plenty of reasons to visit this capital in its coldest months, and here are just a few.

The coldest period in Prague is commonly between December and February, and this is when we’ll arrive, nicely warmed by our jackets, while we enjoy the sights around us. It’s a lot less crowded and a lot quieter, and though there are always tourists here, we’ll get to see each site we visit much better and in many more details, and also take photos undisturbed by thousands of people moving around us. It’s a perfect chance for us to go to the Prague Castle viewpoint, St. Vitus Cathedral, the Petřín Lookout Tower, Letná Beer Garden, the Jewish Quarter and other splendid sites to enjoy sightseeing in a lot more relaxing atmosphere and at our own pace. This doesn’t mean that the city suddenly becomes abandoned. On the contrary. Even with the greatest of colds, the locals go about their business as usual.

So, don’t let the cold weather scare you, as not only are even the most popular of places a lot less crowded, but they look absolutely stunning, covered in their white coats. Imagine those famous centuries-old buildings with their red roof tiles peeking out from their snowy cover. Now, just as you’ve imagined the red and white roofs of the historical buildings during the day, imagine the mysterious Gothic structures during a late night or early morning walk, when the winter fog rises, hovering over the Charles Bridge and the charming cobblestone streets – like a scene from a classic Hollywood movie!

Another huge plus – flights and accommodation are often cheaper during winter.

There are certain things which are considered Christmas traditions in Prague. We’ll celebrate St. Nicholas Day on December 5 first, also known as Mikulas. It marks the start of Christmas for Czech people, and we’ll go to the Old Town Square in the late afternoon to enjoy some fantastic traditional events, especially St. Nicholas, an Angel and a Devil moving in and out of the Christmas markets. But if you can’t make it there in early December, no worries, as in early January we’ll see the Three Kings procession, and we’ll also go to the Bethlehem Chapel to see the holiday exhibition.

Even if you can’t make it to these events, it’s svařák season, and we’ll certainly enjoy some of this delicious and traditional hot mulled wine with aromatic cinnamon whenever you come. We’ll take fun and comforting walks through farmer’s markets and Christmas markets with svařák keeping us warm.

The Baroque buildings of Prague’s Old Town Square become surrounded by the amazing Christmas Markets in the winter, welcoming visitors until early January. They offer hot traditional drinks and delicious, hearty meals, as well as the most charming souvenirs, Christmas decorations, and a variety of gifts.  There are so many of these enjoyable markets that you are bound to run into one even if you’re not looking, and each is simply magical. We’ll use this opportunity to visit some of the most popular Christmas markets located at the Old Town Square, the Wenceslas Square, the Peace Square and at Prague Castle.

Our next destination is an ice rink. There are numerous ice skating rinks in Prague, and each comes with its own charm, but today we’ll go to the famous Fruit Market (Ovocný trh) in Old Town. The market itself exists since the early 13th century and numerous famous buildings are located there. It’s a very special experience to glide on ice, surrounded by snow, numerous colorful lights and brilliant, historic architecture. Prague’s ice rinks are also free and you don’t have to worry about bringing your own skates as we can easily rent some.

Finally, we’ll get to enjoy the far quieter and far less crowded famous museums of Prague. These are some of the most celebrated cultural, historic and art institutions in the whole world. We’ll first visit the National Museum and the National Gallery, then the Franz Kafka Museum, as well as the Jewish Museum that houses the world’s largest collection of Judaica in several historic edifices, followed by St. Cyril and St. Methodius Cathedral, the Museum of Decorative Arts, and as many more as we want to.

As you see, just because it’s gotten colder in Prague, doesn’t mean that you’ll be bored for even a second, as there are many things to see and do here – which can only be seen and done in this time of the year and only in this city.