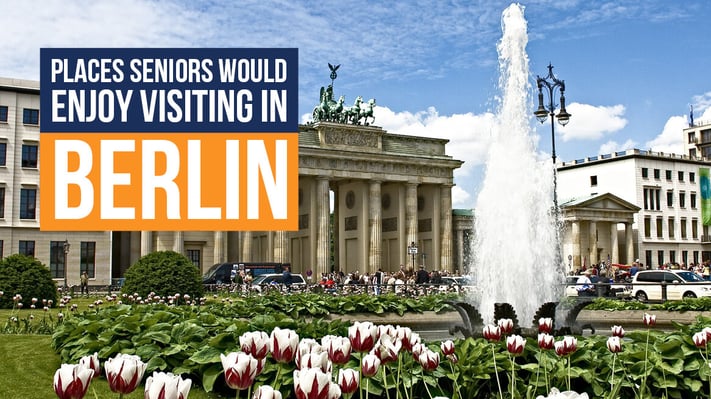 This is a time in your life when you can finally visit and explore those places you have only had a chance to dream about and see in pictures. One European city has become a sought after destination for senior tours - Berlin, Germany. While its young population has branded it a hotspot for young travelers, this city offers a lot to its visitors no matter your age. Rich history, plentiful museums, a thriving art scene and wonderful restaurants make it a place you’ll want to visit too.

To see this city’s rich history come to life and get the most from a senior trip to Berlin, make sure to visit these places:

a 17th century palace, which is the oldest and largest Prussian estate in Berlin. It was one of the most important German royalty residences. The palace features a massive 50-meter-high central dome. Visitors have a chance to explore the inside of the palace: the rich gilded stucco of a 42 meter long Golden Gallery, porcelain collections in the Porcelain Cabinet, and royal tombs in the Mausoleum. The Palace Park features a New Pavilion in a Neapolitan villa style. Do not miss the large statue of the Great Elector, Frederick William of Brandenburg in the Grand Courtyard.

Berlin’s most defining monument and the first neoclassical structure. This sandstone monument is 26 meters high, modeled on the Acropolis in Athens. It features six large columns on each side that form five passages, a four-horse chariot, and two buildings used by toll-collectors and guards.

a huge and elegant Neo- Renaissance palace. Its glass dome, the Kuppel, offers a stunning night view on the city from the rooftop restaurant. This is Berlin’s most famous landmark and the seat of the German Parliament. It was opened in 1894 and housed an Imperial Diet (Reichstag) of the German Empire. Over the years, it was damaged and rebuilt again. The place is opened for public when Parliament is not sitting. To get the most of your visit to the Reichstag, it is recommended to book a tour in advance to avoid huge, always-present queues of tourists.

a place of the oldest and most important museums, located between the Kupfergraben and the River Spree. Museumsinsel is comprised of the Old Museum (houses royal treasures and the Crown jewels), the New Museum, the National Gallery and the Bode Museum (holds collections of antiquities). In 1999, it became a UNESCO World Heritage site. Some of the most famous and important exhibits include the bust of the Egyptian queen Nefertiti, Pergamon Altar and Ishtar Gate.

the most interesting landmark of the city. It features two churches, a modern one built in 1961 and the ruins of the original church which was destroyed in 1943. The place serves as a war memorial containing architectural remnants, mosaic remains and photos.

a New Baroque style building, the largest church in Berlin. Its imperial staircase is decorated with bronze cornices and Albert Hertel’s paintings. The church is divided in three sections: the Parish Church, the Memorial Church and the Baptismal and Nuptial Church. Don’t miss the Hohenzollern Crypt which contains monuments from the 16th to 20th centuries, coffins and almost 100 sarcophagi.

The Berlin-Dahlem Botanical Garden and Museum

the largest and one of the most important botanic gardens in the world. It houses 22,000 different species of plants, divided into sections (medicinal plants, tropical and subtropical area plants, an arboretum with 2,200 species of trees and shrubs, a large pond which forms the centerpiece of the biotope for marsh plants and marine, etc). A must see is the impressive Botanical Museum which holds the herbarium with more than two million plants.

The Memorial to the Murdered Jews of Europe

a place of warning and remembrance. Opened in 2005, the memorial features 2711 concrete slabs. In the underground information center, you can learn about the victims, explore themed rooms and see historical photographs, film footage of persecution and extermination sites, farewell letters and diaries of the victims, etc.

Apart from these popular senior tourist attractions, other places worth visiting include Schiller Theater, Checkpoint Charlie and The Mauermuseum (if you’re interested in the Cold War), Jewish (Jüdisches) Museum, and the Tiergarten (the oldest and most popular park).