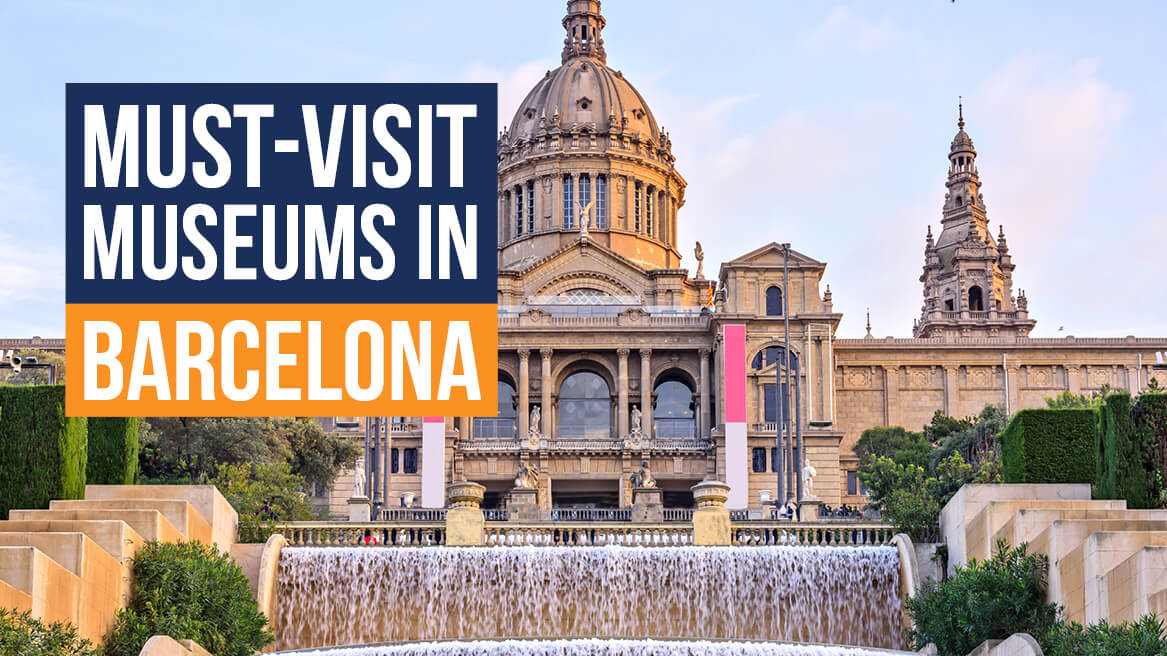 Barcelona is one of the most famous cities in the world, popular for pretty much everything it has to offer to its admiring visitors, including its charming architecture, magnificently rich culture, some of the world’s most celebrated art, popular cuisine, and much, much more. Granted, Spain has had its fair share of dark chapters in history, but Barcelona has been putting in effort to preserve both the best and the worst within the country’s history, culture, and art, so that each new generation of locals and visitors would learn about it all. Now, all the country’s many great and small – but nonetheless fascinating - accomplishments are housed in what are today some of the most renowned museums in the world. And we’re about to visit them.

Our first stop is already a winner, and a national treasure at that. The Museu Nacional d'Art de Catalunya is the national museum of Catalan visual art and one of the Spain’s largest museums located on Montjuïc hill, in the grand Palau Nacional. The Italian-style building was erected in 1929 and has housed the museum since 1934. It is home to a number of absolutely brilliant collections, such as a collection of Romanesque church paintings, as well as the Catalan art and design from the late 19th and early 20th centuries that include modernisme and noucentisme and some of the most famous pieces of Romanesque, Gothic, Renaissance, Baroque and Modern Art. Moving from room to room we can’t but be awestruck by the mastery and the splendor around us. Among a myriad of collections, we see the exquisite paintings that the Catalan politician and arts patron Francesc Cambó donated to the museum, as well as the renowned Thyssen Bornemisza Collection.

Museum of the History of Barcelona

Another gem on our path is the Museum of the History of Barcelona, inaugurated in 1943. This is a place dedicated to research, conservation and exhibition of the city’s great historical heritage, from its origins in Roman times until today. But the museum is also dedicated to teaching others those many stories it has gathered over time. The museum's headquarters are located on Plaça del Rei, in the Barcelona Gothic Quarter, but there are several historic sites all around the city. We now visit all of these, and on our way we enter the ancient Roman city called Barcino and see its columns dedicated to Emperor Augustus, and then we step into the medieval times to walk through the Jewish quarter and greet the Sephardim, and further we walk to the medieval royal palace, the Palau Reial Major. From the medieval period we’re transported to the industrial buildings and sites associated with architect Antoni Gaudí and the Spanish Civil War. So much history and art to see!

Our trip is far from over, as we’re now in the Barcelona Museum of Contemporary Art, opened in 1995 in the Plaça dels Àngels. Upon its completion, this structure with the elements of Modernism was referred to as ‘the pearl’ among the beautiful old architecture and narrow streets of the nearby Gothic center. From its wonderful interior illuminated by the natural light, we can see straight across the plaza. The museum houses three main galleries or five smaller ones, one of which is housed in a tower. We walk through each and admire the permanent collection of some 5,000 works from the mid-20th century until the present day, with a particular focus on the post-1945 Catalan and Spanish art, with some work by International artists displayed as well. In 2007, the museum’s Study Center was opened, while the Library Reading Room and Special Collections Room allow free access to the museum’s books, publications, and archives. There are also lectures, seminars, video screenings, and much more we can enjoy in this museum.

Our final stop is the amazing Museu Picasso – home to one of the most extensive collections of artworks by famous Pablo Picasso. It’s situated in five medieval palaces in the Old City from the 13th and the 14th centuries, built in the Gothic style. Picasso's lifelong friend and secretary, Jaume Sabartés, came up with the idea for this museum – the first of its kind and the only established during the artist’s lifetime. As a matter of fact, the two had met in 1899 and Picasso had given his friend many paintings, drawings, and prints. The museum opened in 1963, and Sabartés donated 574 works from his personal collection. The museum expanded over time thanks to many immensely valuable donations, now housing more than 4,250 works, including the First Communion and Science and Charity.

Hasn’t this been a lovely museum tour? These are some of the best-known houses of history, culture and art, but far from all that Barcelona has to offer. If you’d like, we can go visit many more various and truly enjoyable museums. No matter what you’d like to see, Barcelona’s certainly got it.