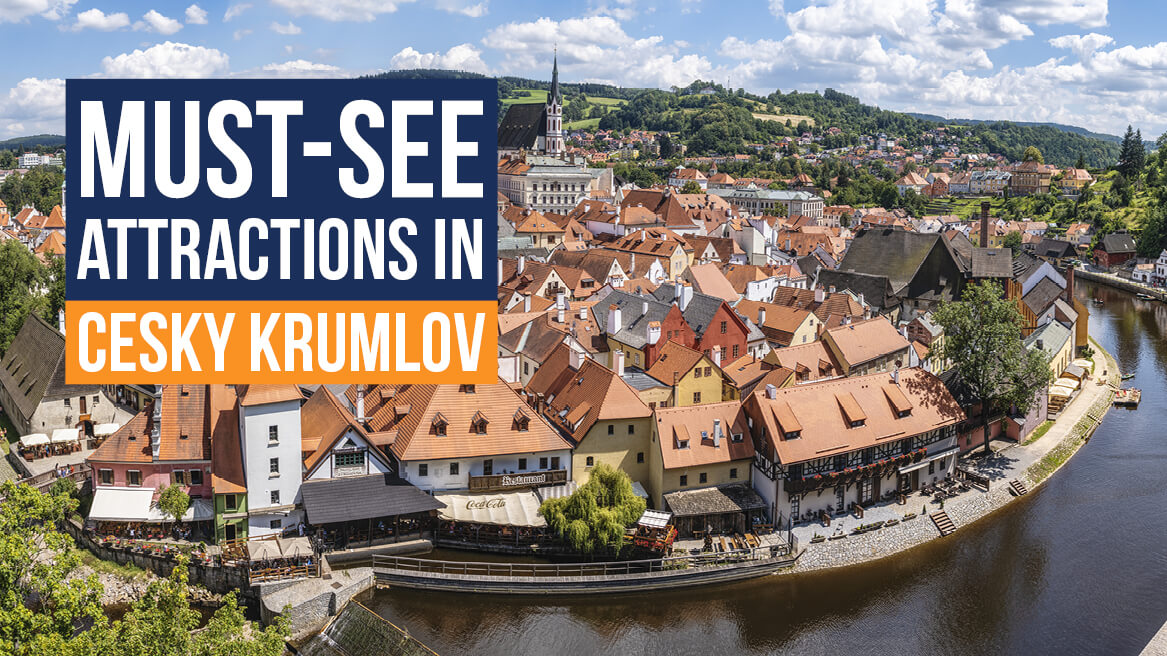 Český Krumlov is a perfect place to include in your next escorted tour to Eastern Europe. It’s the second most popular tourist attraction in the Czech Republic, the center of which has been declared a UNESCO World Heritage Site. It is a walled city where most of the architecture dates from the 14th through 17th centuries, notably in the Gothic, Renaissance, and Baroque styles. The town has a lot to offer to its guests: magnificent religious sites, excellent galleries and museums, many great restaurants, hiking nearby Mount Klet’, kayaking or boat riding along the River Vltava, etc.

This UNESCO World Heritage Site consists of forty buildings and palaces, five castle courts, and a park. The original structure was erected in 1240, but the impressive castle and the town’s largest structure that we see today was built in the 17th century. There are numerous and marvelous things to see here, such as the Rosenberg Ballroom, the Chapel of St. George, the Renaissance Hall, the Royal Apartments, paintings, tapestries, and period furnishings. One of its most beautiful features is the Baroque theatre built in 1682, with its still-operating 18th-century stage equipment and props.

This splendid structure is one of the town’s oldest surviving buildings. Its construction lasted from the mid-14th century until the end of the Baroque era. The vast property also includes the Beguine Convent and the monastery garden. The many fascinating details to see here include the intricately carved entryway, exceptional statues of saints, a beautiful early Baroque altar, wonderful old organs, as well as a distinctive set of trusses in the Gothic, Renaissance, and Baroque styles. The Minorite Monastery is still in use, and the best time to visit is during one of its outstanding religious concerts or recitals.

The Church of St. Vitus

The second largest structure overlooking Český Krumlov is the Roman Catholic Church of St. Vitus. It was originally built as a small church in the 14th century. While the interior is awe-inspiring, the exterior is stunning too, impressive from all points of view, with a fabulous façade, an amazing 19th-century spire, and a spectacular tall roof. The church is well-known as the burial site of many generations of a number of important Bohemian families. It is also famous for its unforgettable concerts.

Český Krumlov is known as one of the most beautiful Renaissance towns situated in the Bohemian scenery, always inspiring artists and writers. The art is ever-present here, including the centuries-old tradition of painting frescoes on buildings. This town is home to the Egon Schiele Art Centrum, a large gallery and museum devoted to the Austrian painter Egon Schiele who was greatly inspired by the architectural beauty of his mother’s hometown and its natural surroundings. Opened in 1992, the privately owned Centrum is home to classical and contemporary 20th-century art, featuring works by many prominent artists, such as Gustav Klimt, Salvador Dalí, and Pablo Picasso, and a permanent exhibition of Egon Schiele. There are also regular lectures, workshops, and concerts held for the visitors.

Another must-see in Český Krumlov is the Regional Museum. It has outstanding displays that include numerous archaeological exhibits and artifacts, fine arts and folk arts, weaponry, furnishings, and ethnographic displays, all of which tell the long and complex history of the town and of the region of Bohemia. Make sure to see its excellent collection of Gothic sculptures and a massive ceramic model of Český Krumlov built in exquisite detail. While there, visit is the wonderful nearby Museum of Architecture and Craft.

One of the many excellent museums to visit in Český Krumlov is the Wax Museum. Located in a Renaissance house, it houses many interesting wax figures telling the story of medieval Europe, as well as wax figures of the 20th and 21st-centuries celebrities. In the amazing interior of the former Church of St. Jošt, you’ll find the Marionette Museum, which features fascinating displays with the 19th-century stages and puppets, complete marionette theaters, and modern collections from the National Marionette Museum in Prague. Museum Fotoatelier Seidel is a treasure box of information about the history of European photography, with numerous historic photos and postcards, glass plate negatives, and old artifacts. Finally, in the Museum of Torture, located in the old Town Hall’s medieval cellars, you’ll find numerous artifacts and instruments of torture, including a display about witch burnings.

Český Krumlov hosts a number of events each year. One of the biggest is the Five-Petalled Rose Celebrations, held on the summer solstice weekend, when the town center becomes a medieval town with craftsmen, artists, musicians, etc., while the local people wear their medieval costumes. There are many activities to participate in or observe in the Castle grounds and along the river, such as jousting, fencing, historical dance performances, and folk theater, the entire festival culminating in a fireworks display. There are numerous music festivals and concerts held throughout the year, such as the International Music Festival Cesky Krumlov and the Open-Air Theatre with the Revolving Auditorium.