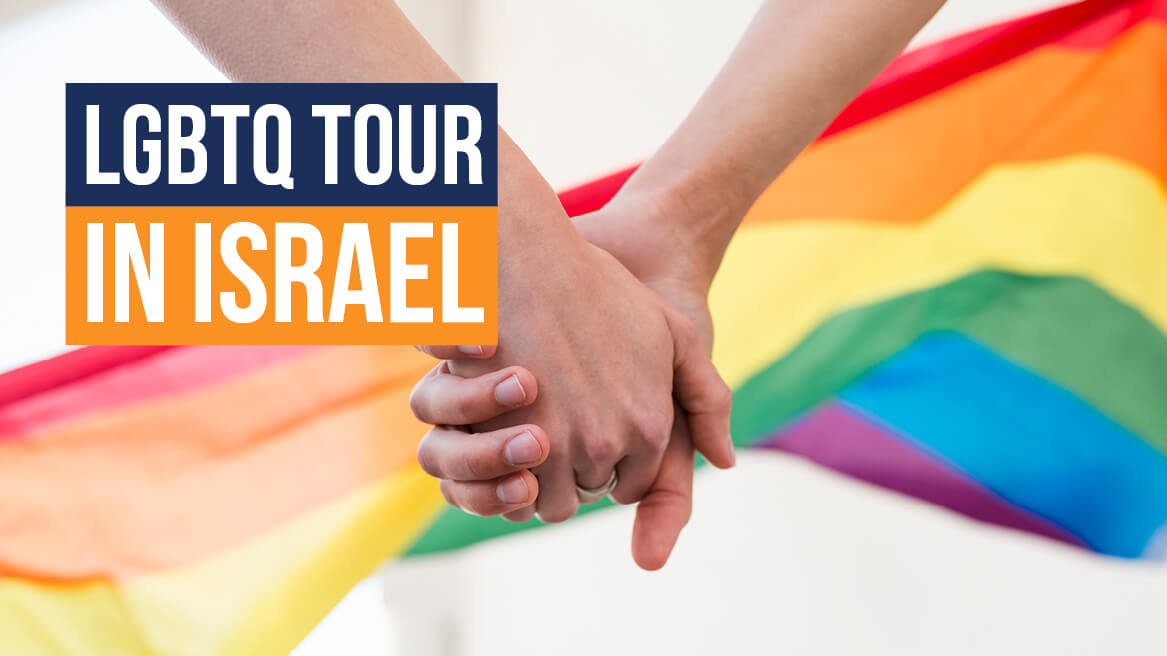 Israel is certainly the best country in the Middle East for LGBTQ individuals to live, be it alone or with their families. People in this country are largely accepting and welcoming, while the government has been actively promoting social equality for LGBTQ people for more than a decade. What’s more, Tel Aviv has become one of the gay capitals of the world. Therefore, there are many types of tours available specifically for non-heterosexual individuals.

For us, it’s simply a matter of offering a tour that creates a memorable experience – an expert tour, based on unsurpassable knowledge of the region, the highest international standards, and work together with fellow professionals in the LGBTQ community.

Here’s a tour option that combines many of the country’s absolute must-sees, as well as the sites of great significance for Israel’s LGBTQ community.

We have a phenomenal trip ahead of us – so many sites to visit in Israel and so little time. In Tel Aviv, our fantastic starting point, we’ll see many world-famous sites, including Jaffa port, Neve Tsedek, and Binyamin arts and crafts pedestrian mall. From Tel Aviv, we’ll drive to the ancient city of Caesarea to see the remains of this Roman town, followed by a drive through Haifa, proud home of the breathtaking Bahai Temple and Gardens. Next up is a nature’s wonder, the grottoes of Rosh Hanikra, then Safed, the center of the Kabbalah movement and a wonderfully artistic city. We’ll also spend a night in a kibbutz, visit Tel Dan, a winery, and have a Jeep ride on the Golan.

On we go towards Jerusalem, stopping at many historically important sites along the way, such as Capernaum, Magdela, Beit Shean, Jericho, and Mount Scopus for a phenomenal view over Jerusalem. The Old City, the Mount of Olives, Mount Zion, Dormition Abby, Tomb of King David, Room of the Last Supper, Armenian Quarter, Jewish Quarter, Western Wall, Cardo, Via Dolorosa, Church of the Holy Sepulcher – and much, much more awaits us in Jerusalem. We’ll also tour the New City, and visit Yad Vashem museum, dedicated to the victims of the Holocaust. For some culinary delights, we’ll go to the Mahene Yehuda market. We’ll then proceed to the Masada fortress and the Dead Sea.

This center is a municipal establishment founded in 2008, guided by the principle that all people are equal. It is situated in Tel Aviv’s center, in a restored Bauhaus building, which opens directly into the Meir Park. On the ground floor and terrace, you’ll find an auditorium and a popular cafe, while the upper floors encompass rooms for meetings and community activities, a theatre group’s rehearsal room, an indoor playground for toddlers, the offices of several LGBTQ organizations, and a health care clinic for the general public, but with a focus on the LGBTQ community’s needs.

The center organizes numerous programs and activities in Israel, including educational lectures and workshops; social events; cultural programs such as theatre, dance, and concerts; community organizations for LGBTQ youth, as well as parents of LGBTQ persons, religious groups, seniors, people with HIV, etc.; and legal, medical, psychological, hotline, childcare, and other support services. People here are very welcoming and invite all to explore the center.

TLVFest or the Tel Aviv International LGBT Film Festival is held every year in Tel Aviv. The films are primarily screened at the famous Tel Aviv Cinematheque. The festival is focused on LGBTQ cinema from Israel and abroad, in order to promote and celebrate it, but also to promote pluralism and tolerance in Israeli society. It’s been an ongoing event for fourteen years already, and it guarantees a great time with fantastic domestic and international cinematography. The 15th TLV Fest will be held in June 2020.

Tel Aviv’s welcoming and beautiful Mediterranean beaches are a favorite destination for travelers across the world and a top destination in Israel. We can spend the day swimming, playing volleyball, enjoying the sun, or a nice stroll, and in the evening, we can have a cup of coffee in one of many lovely cafés, or a tasty meal in a nearby restaurant. The city is known for beaches catering to many different communities, such as dog lovers, religious people, art lovers, etc. For example, we can take a walk on the Tayelet or ‘the Promenade’, built in the late 1930s, stretching from Bograshov Beach to today’s Jerusalem Beach, with many beaches and attractions along the way.

Furthermore, near the center of Tel Aviv, close to the popular Dizengoff Street, you’ll find the Hilton Beach – Tel Aviv’s gay beach and the venue of the best parties during the pride parade. It’s a slightly secluded beach, just beneath the Hilton Hotel, popular for its delicious beach food and many water-sport options, such as windsurfing or kayaking, while for beginners and children, there are lessons available as well.

Wasn’t this a fantastic tour? We’ve seen so much, and we’ve learned so much. We witnessed this country’s long and fascinating history, its art, culture, architecture – both the ancient and the modern; we visited a center that works hard to promote LGBTQ rights and houses the memorials to victims of atrocities; we went to a film festival, tasted Israel’s numerous culinary delights, and relaxed on its beautiful beaches. And there’s still much more left to see for when we come back.