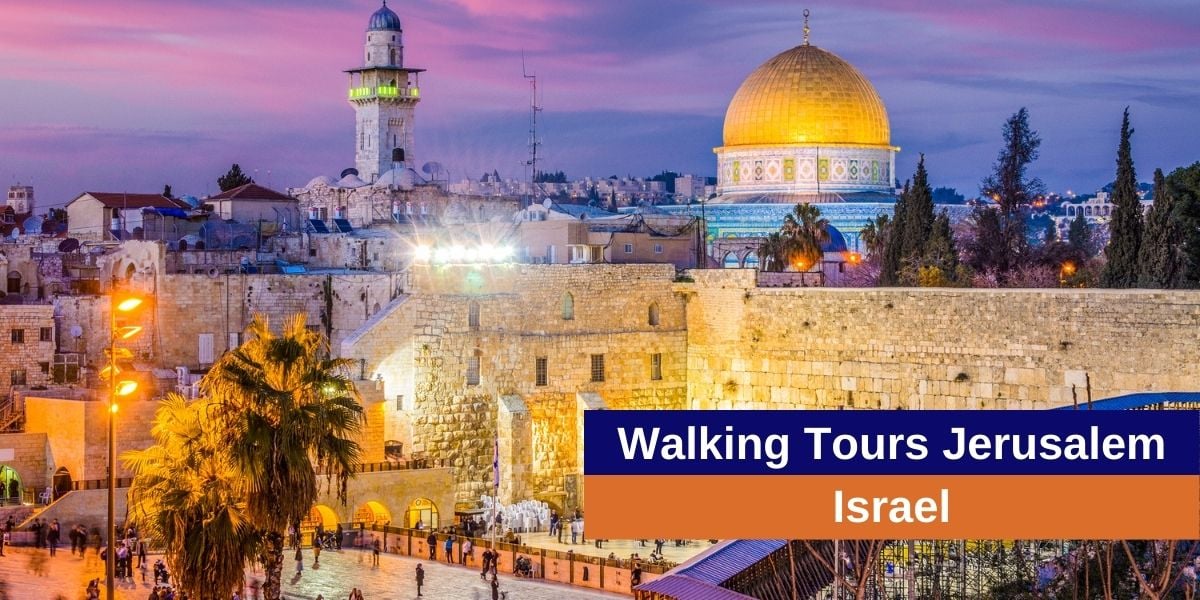 Jerusalem, Israel, is known for its old city, ancient locations, and the Western Wall. It’s a great base for travelling around Israel, Kosher Jerusalem tours, and is one of the most famous locations in the country. Tours in Jerusalem are eye-opening peeks into history, and the city has so many different layers to explore.

To some, Jerusalem is the centre of the world–where cultures, religions, and ideas meet, and where history happens. It’s a modern city on one hand and an ancient religious site on the other. It’s the location of some of Judaism’s most tragic moments as well as its most important.

Jerusalem is a great city to get around in by car or bus, but did you know it’s also a great walking city? Take a Jewish heritage full-day walking tour around the city and learn about Jewish history up close.

While tour buses and cars sit in traffic in the holy city, a walking tour is the perfect way to see the city from a new perspective and possibly cover more ground and in more detail than you would have on a tour bus.

That’s why we’ve compiled a list of some of our favourite walking tours around the holy city. 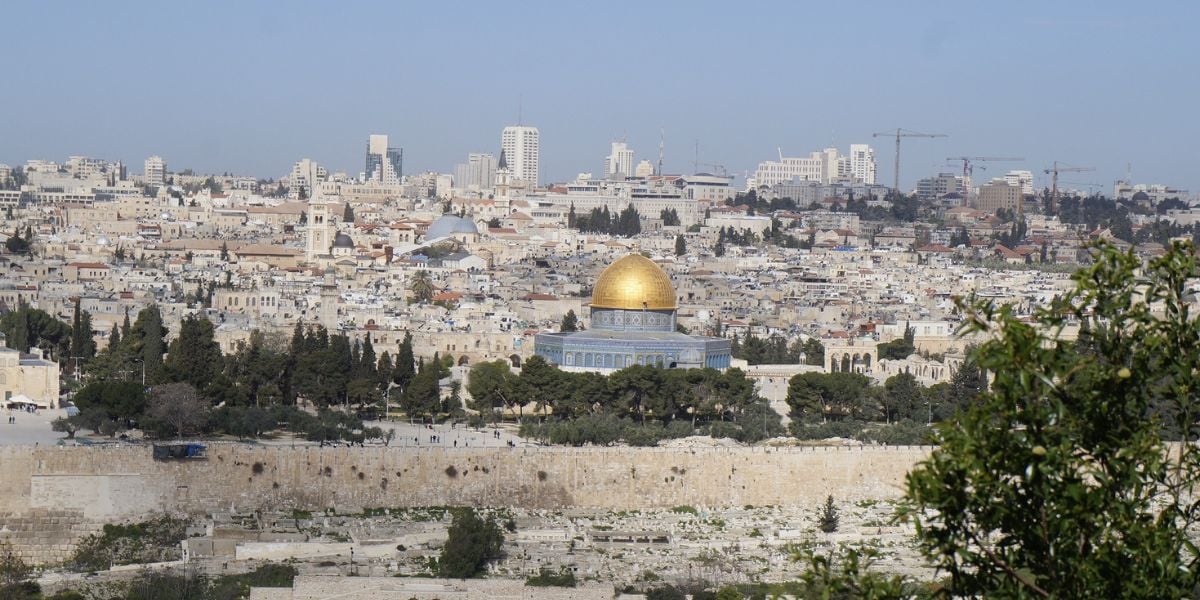 Is Jerusalem a good walking city?

Jerusalem is a challenge to walk on for some. It’s hilly and many of the areas for walking tours are made of stone or cobblestone. It’s not the easiest place to walk, but if you do decide to go on a walking tour, it’s the best way to get to know the city. There are some special places in Jerusalem that you can really only access on foot.

When is the best time to visit Jerusalem?

Every season has benefits to visiting Jerusalem, but the best times are April through May and October through November. The weather is best then and there aren’t many huge crowds. Check a Jewish calendar to see if you cross over with any of the Chagim.

What is the City of David?

The City of David is an archaeological site in Jerusalem. It’s the birthplace of Jerusalem, the place where King David came to turn the ancient city into a spiritual and political capital for his people.

Can you explore Jerusalem in a wheelchair?

Even though Jerusalem can sometimes be challenging to walk around, the government of Israel has made it easier for wheelchair users to have access to the city.

Here are the best walking tours in Jerusalem

City of David and Underground Jerusalem 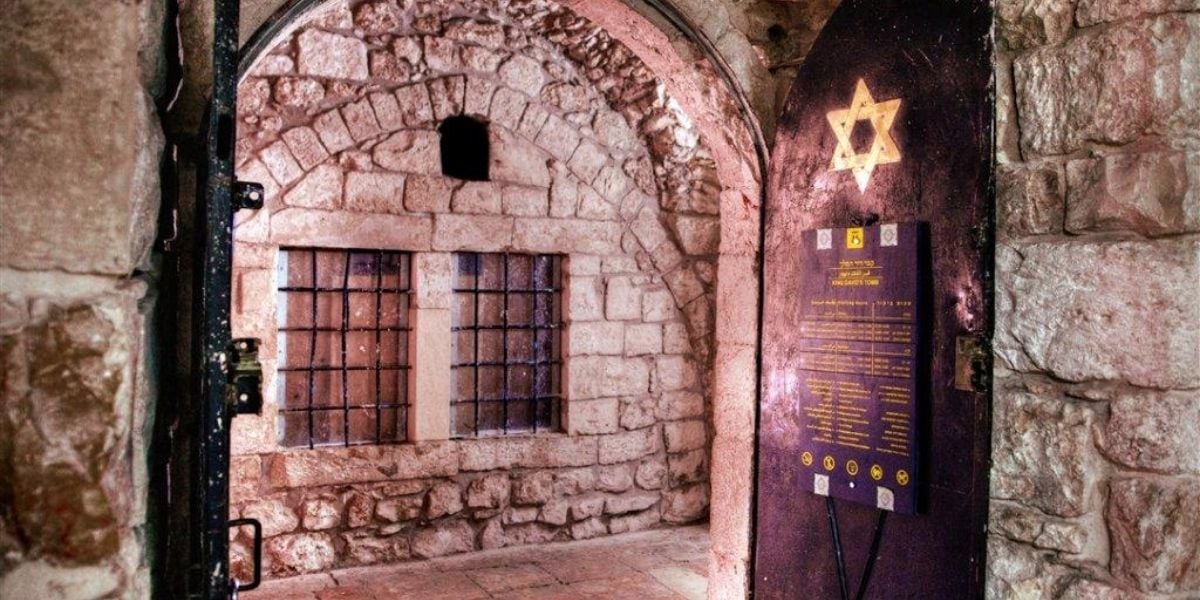 The City of David is an archaeological site in Jerusalem. The city has recently made it even more accessible. There are events, shows, and exhibits in this spectacular location.

But what does a walking tour in this location look like?

This is one of the best Jerusalem Walking Tours, a classic to really get to know the history of the city.

The City of David is one of the best ways to see Jerusalem. Start your tour on the Mount of Olives for the most beautiful view of Jerusalem. Walk by the tombs of Absalom, Zechariah, the tomb of the sons of Hezir. You can also visit Mount Zion and see David’s tomb. At the tomb, it is common to sit and pray.

From there, a trip to the Jewish Quarter to experience the magic of the ancient city, as well as visit synagogues and underground Herodian mansions, including a ritual bath and original mosaics. At the Byzantine Cardo, observe the excavation project and look at ancient Crusader stores now used for shops.

Head to the Wailing wall for an emotional connection to the city and move on to the city of David to see the tunnels that brought water to the residents of the city.

A walking tour of orthodox neighbourhoods

Jerusalem isn’t just stones and old architectural sites. While those places are fascinating, for many people, it’s the culture and people that live there now that is exciting to explore.

Some of the most interesting neighbourhoods in Jerusalem are home to orthodox communities, and many of these places are easily turned on foot.

On a Jewish Heritage Tour in Jerusalem in an orthodox neighbourhood, break barriers by speaking to people you might never have known about.Learn about the way of life and beliefs and speak to locals. Break your own preconceptions about how Torah-observant Jews live.

There are a few different ways that you can navigate a walking tour of orthodox neighbourhoods in Jerusalem, but we’ve picked out one of our favourite routes:

Be respectful of the communities you are learning about. Dress modestly and be open to learning about a world you might not know much about. 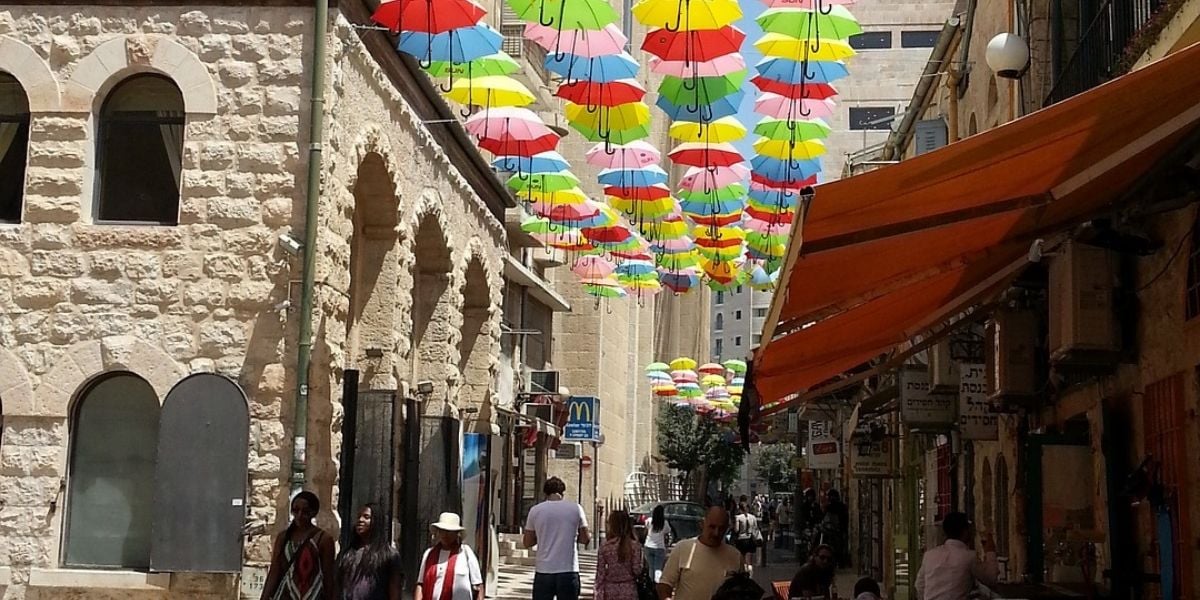 Modern Jerusalem will surprise you. Outside the walls of the old city, this is a thriving city with its own culture, developments, and communities.

Take the opportunity on a walking tour to learn the history of Modern Jerusalem. Visit neighbourhoods like Nahalat Shiva, Mishkenot Sha'ananim, and Mea Shearim.

Learn about the importance of the city today. Walk to Yad Vashem, Ein Karem, the Israel Museum, and the First Station, where you can really see how modern Jerusalemites live.

Jerusalem of the First and Second Temple Periods 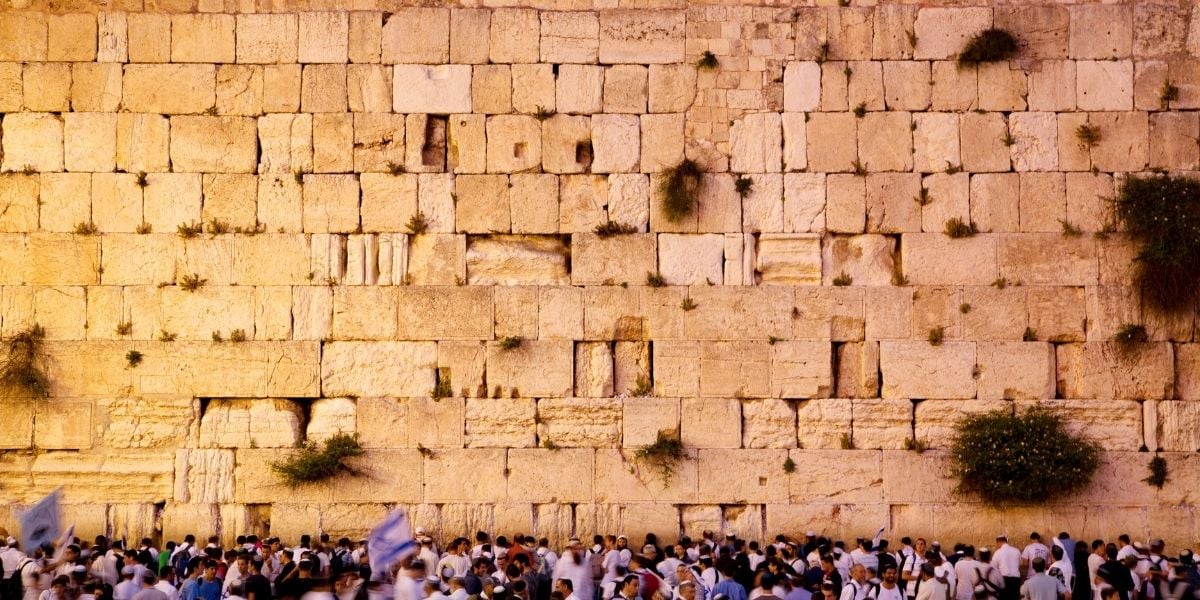 This Jewish Heritage Walking Tour is perfect for people who love history.

Explore the city of kings, the city where Jews used to congregate for high holy days, make sacrifices, and pray.

Start at one of the gates of Jerusalem, explore various excavation sites, and go with an expert tour guide who can tell you the difference between the first and second periods. This is the perfect walking tour for people who love ancient Jewish history.

The Jewish Quarter has ancient origins, but its current iteration is relatively new. It was rebuilt in the 1980s after its destruction during the 1948 War. This is a great walking tour to explore art galleries, hidden treasures, and beautiful alleyways. The personalities that live in the Jewish Quarter make this place especially unique.

Visit the Hurva synagogue, as well as the Sephardic synagogue from the early 17th century. Learn about the architecture, the renovations, and the history of this magical place.

The defensive wall around the Old City of Jerusalem is likely over 4,500 years old. Take a walk and explore the gates built during the Ottoman period in the 16th century. Start at the Jaffa gate then walk along the walls. 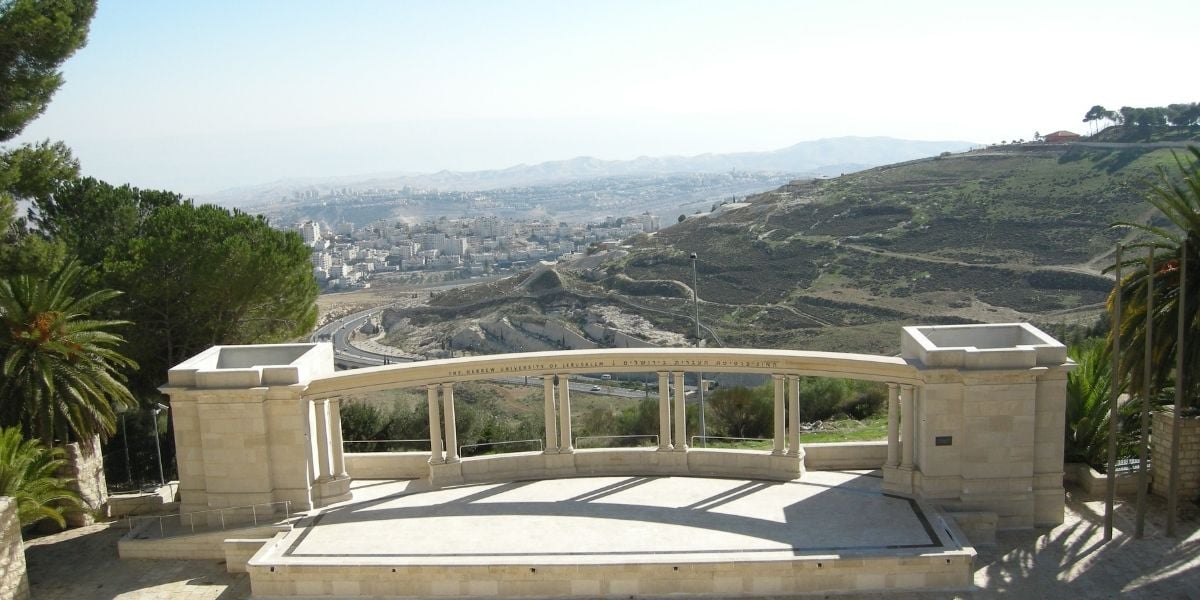 I bet you’ve never thought about taking a walking tour in a graveyard, but that’s just what a Mount of Olives Walking tour involves. This tour starts at the Kidron Valley to visit the tombs of Zechariah and Benei Hezir.

There are many Christian sites, but on a Jewish heritage walking tour, you might start by visiting the famous graves of different Jewish people, including Theodor Herzl, and learning about Jewish burial rites. 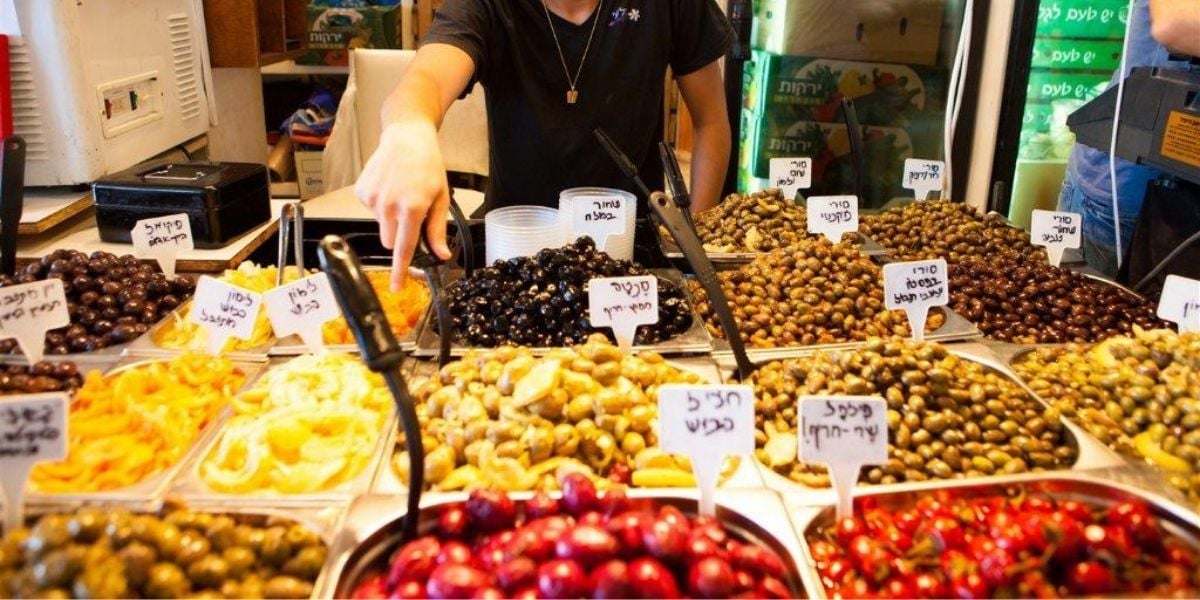 The Nachlaot and Machane Yehuda Market are part of new Jerusalem–not the old city, not filled with architectural wonder, but a great example of modern Israel and how locals live.

Until very recently, much of this area was wilderness. Now, Nachlaot is a collection of neighbourhoods, all organized around a small central courtyard. It’s a hip, beautiful area filled with artists and a unique vibe that only exists in Jerusalem.

It’s the perfect walking tour for those who love art.

Machane Yehudah, a shuk in the city, is perfect for exploring a market filled with things from halvah to bourekas, and is also a haven of street art.

On a walking tour, visit the landmark buildings of the famous area, and learn about the street names based on Jewish scholars and poets.

It doesn’t really matter what Jerusalem walking tour you will take, they are all filled with Jewish heritage, art, and a strong cultural connection to the essence of Israel. We would argue that taking as many as you can increase your experience and enjoyment of Jerusalem. Make sure to meet new people, talk to them and explore every road possible in the city. We promise you will never forget this city once you have walked its streets old or new.