No matter which religion you practice, chances are Israel holds a great deal of historical significance to you. Many people want to go on a pilgrimage to view the sites they’ve studied in person. Jerusalem, in particular, holds much religious significance and is a site of many relics worth exploring for any tourist. While we have written on the history of Jerusalem's Christian Quarter, we want to go into more detail about the great attractions found there.

Closely related to the history of the Christian Quarter is the Church of the Holy Sepulcher who had many destructions and reconstructions due largely and political rulers of Jerusalem succession. Immediately after the crucifixion and resurrection of the Savior, the Holy Sepulcher Golgotha place was venerated as sacred not only by the Apostles and the Jerusalem Christians but also of other faithful Christians throughout the Holy Land and the entire world.

After defeating the last Jewish revolt the Roman Emperor Adrian, who did not support the Jews nor the Christians, decided that all Christian and Jewish buildings in the area were to be desecrated and turned into pagan buildings. So on the site of Golgotha, a pagan temple was built. By the early fourth century, due to the decree of Saints Constantine and Helen, the pagan temple was demolished and in its place was built a vast complex of buildings designed to perpetuate the memory of the last moments in the life of the Christian faithful Savior.

In 614 the Persians burned the site, and restored just like the previous one by a worthy abbot of the Holy Sepulcher modest name. Henceforth Jerusalem invaders repeatedly brought damage not only to the Church of the Holy Sepulcher, but also to its leaders and ministers there. In the early eleventh century the whole Christian presence here was completely destroyed under the command of Egyptians, but Byzantine emperors rebuilt it immediately.

Church of the Holy Sepulcher and Resurrection of Jesus Christ

Church of the Holy Sepulchre

Throughout history the church has had different names, but in general, most people call the Holy Sepulcher Church, because the church was built on the site where Jesus Christ was crucified and buried in a tomb cut in stone. Others call it the Church of the Resurrection because it is there that Jesus is said to have risen.

In front of the church is a spacious courtyard where pilgrims gather during big celebrations and Christian processions throughout the year, but also to listen to instruction guides about church history and the events that occurred during this holy. From this square-shaped courtyard can see many monasteries and chapels around the Orthodox, the Armenians and Copts.

To the north in the form of arches open two entrances, one built and one asks for access to the Church of the Holy Sepulcher. Entering the church, just a few meters from the entrance reaches the Stone of Anointing. This is actually a slab of red stone that protects the place where Joseph of Arimathea and Nicodemus places down the Lord's body after he sat him down from the cross. A beautiful marble plaque hanging above many candles. All believers who enter high today in the Church of the Holy Sepulcher kneel in this place with great reverence, kissing and tears wetting the stone which was wrapped with flavors and shroud the body of Jesus. The patchwork front is shown in bright colors this terrible event. Around the slabs of marble, covered with oil and rose petals, on Good Friday, crowds sing Lamentations.

Descending the stairs from the altar of Calvary, we turn again to the Anointing Stone in the west of the church and move into the Holy Sepulcher where Christ's body was laid. The Holy Sepulcher is in the west, before the Church of the Resurrection, in the middle of a large circular space covered with a huge dome supported by columns of stone.

Church of the Holy Sepulcher and Resurrection of Jesus Christ is the holiest place on Earth. Here have spent the greatest miracles of Christianity, and today they continue to impress or to convert all faith not only in the less faithful, but also other people from other religions that tourists simply become Christians at the authentic sense of the word.

Golgotha - the Altar of Sacrifice Salvation

The chapel built here rests on on the rock of Mount Calvary, the place where the cross was erected on which Jesus Christ was crucified. On the right is the first altar Cross which marks the place where Jesus was stripped and nailed to a cross. In the middle of the main altar called Holy Calvary is fixed in the cleft of the rock cross and reminds us of the crucifixion of Jesus. In the vicinity is an icon of the Blessed Virgin Mary, which passed through the heart of pain as a sword seeing her beloved Son crucified among thieves. Today, this place is the Holy Table of the altar on which Mass is celebrated daily. At the bottom of the Holy Table are some transparent panels that protect the earthquake-cracked the rock of Golgotha.

Church of the Resurrection

When stepping inside the Holy Sepulcher, experience coming before a large church called Church of the Resurrection. This church is in the center of the entire complex and is an exclusively Orthodox Church. This is the Cathedral of the Holy Sepulcher itself. In the middle of the church sits a special candle that marks the spiritual geographical center of the earth according to the Scriptures. The church is huge and impresses with Romanesque architectural style type and Orthodox typical indoor atmosphere.

Under the same huge rotunda of the Holy Sepulcher are other Christian shrines south from the altar Armenians, Copts altar westward, and a Catholic chapel to the north. The north aisle belonging to the Franciscans is built on the place where the Lord appeared to the myrrh-bearing women after the resurrection. Climbing a few steps, arrive at another Catholic chapel in the place where according to tradition, the Virgin Mary Holy Savior appeared after Jesus' resurrection. Inside the chapel is a fragment of stone column that was linked to the Lord, the courtroom where the Roman soldiers beat him and mocked him. Here tradition says that the Patriarch of Jerusalem and the Empress Helena reached the dead wood of the cross and raised again that soon.

Chapel of the Angel

, via Wikimedia Commons
The Chapel of the Angel is a little sub rectangular building with two rooms. In its center is a presto over which sits a stone in square shape. This stone protected by a glass is a piece of stone that was laid at the door of the tomb of Christ. On this rock every midnight is placed a holy mass and liturgy. To the right and left sides are two circular recesses communicating with the outside.

A corridor surrounding the Interfaith Resurrection Church continues with a place eastward to a small shrine built over the place where the Roman soldiers guarded Jesus before he was crucified. The floor of the chapel is a slab of stone with two holes where the condemned placed his feet that underneath were tied with a chain. This place of passing is marked by an icon of the miraculous Virgin Mary.

In the east of the Church of the Resurrection, based on the prison Shrine of Jesus to Golgotha, is a special the place where two small chapels meet. This is where the Roman soldiers were charged with overseeing the crucifixion of Jesus. Deeply moved, Jesus confessed before all for “truly the Son of God was It” Mt. 27, 54 for the testimony of this truth he was beheaded and his head thrown into the city dump. A blind woman discovers the city through vision and immediately receives the Head of healing. Thus St. Longinus became the first martyr and confessor of the Christian faith.

If you’re interested in exploring the beautiful city of Jerusalem while also delving into the history of Christianity, check out our guide to a Holy Land trip by clicking the button below or contact Gil Travel to set up the perfect tour for you. 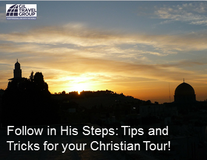