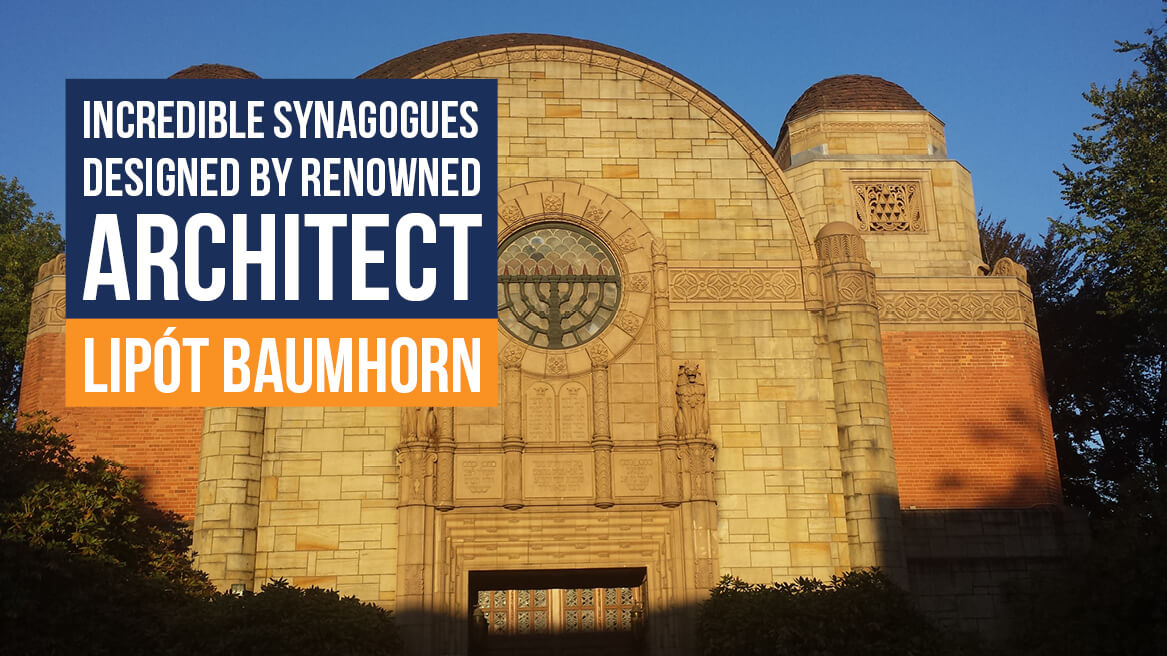 Lipót Baumhorn (1860-1932) was a Hungarian architect and one of the greatest figures in the world of the Hungarian synagogue architecture. He was born in Kisbér and graduated from the Technische Hochschule in Vienna, where he studied under Heinrich Freiherr von Ferstel, a vital figure in the late 19th-century Viennese architecture and the designer of the Votive Church. Baumhorn also worked in the office of Ödön Lechner in Budapest, which was another crucial period for the formation of Baumhorn’s recognizable style, as he adopted a part of Lechner’s characteristic style, but instead of the folkloric elements, he followed more standard architectural conventions, using patterns appreciated by various Jewish communities. In 1894, he opened his own office.

Baumhorn built twenty-five synagogues and restored many others in Austria-Hungary, in his unique fin de siècle Hungarian unification of Art Nouveau and Historicist styles, also known as Magyar style. He merged Romanesque, Gothic, Renaissance, Baroque, and Moorish motifs. Baumhorn designed synagogues in Croatia, Serbia, Romania, Slovenia, Slovakia, etc., and he also built a number of other buildings, including a high school for girls, the headquarters of companies and institutions, and housing. It is difficult to choose his best work, but here are five synagogues, some famous, others underrated, but all worth your visit on your escorted tour to Eastern Europe.

Built in 1888, this is actually Baumhorn’s first synagogue, and it’s the oldest synagogue in Hungary. It is a beautiful edifice, yet one will immediately notice that its beauty is quite different from his other synagogues. It was constructed in the Moorish Romantic style with bright orange stripes, a central dome, horseshoe arches, and bulbous cupolas at the top edges of its rectangular facade. It served the local Jewish community well and has changed very little since it was first opened. In front of the building, you will find a sculpture, which is a Holocaust memorial. Today, the building is home to the Technology and Science House.

Built in 1903 in Moorish-Art Nouveau style for Szeged’s large Neolog community, this is one of Baumhorn’s most celebrated, most ornate, and most magnificent synagogues in Europe. The 48.5-meter-high building has an enormous dome and splendid interior. The suggestions of the city’s rabbi, Immánuel Löw, were taken into consideration when designing the elaborate details and ornaments.

Both the exterior and the interior decorations are highly complex; they represent and are symbolic of the most important events of the Jewish community’s history and religion. The gorgeous inner cupola, for example, symbolizes the world. Today, it’s still owned by the Jewish community and is a part of a communal complex that also includes a small chapel. Baumhorn also designed the ceremonial hall in the Szeged Jewish cemetery.

This is another Baumhorn’s masterpiece, designed in the Moorish Revival style on the bank of the Tisza River in Hungary. It was built in 1898-1899 but was seriously damaged in World War II. After the Holocaust, this graceful, domed structure no longer served as a synagogue but was used as a storage facility for the belongings of the Jews who were killed in 1944. By the 1960s, it was badly decayed and the Jewish community sold it to the city of Szolnok, which restored it and converted it into an art gallery in 1972, keeping the exterior intact. A detailed and careful renovation was carried out between 2000 and 2004, when the exterior details were restored, the inner structure and the roof were reinforced, and interior alterations were done to suit the building’s new function, but without altering Baumhorn’s original architectural unity of the edifice.

This synagogue is a prime example of superb architecture. It’s a beautiful, undeniable masterpiece by Baumhorn, which was once the second largest site for Jewish worship in Budapest. It is now a part of the Holocaust Memorial Center, a national institution founded by the Government in 1999. The Center’s central courtyard rests between six columns and an archway, under which stands an eight-meter-high black glass wall that encircles the inner court and serves as a Memorial Wall on which the names of the victims of the Holocaust in Hungary are carved by special laser technic. The synagogue itself is a must-see but, unfortunately, it is no longer active and is severely underappreciated.

The Fabric Synagogue is a Neolog synagogue in the Fabric quarter of Timișoara, Romania’s third largest city and the center of western Romania. The exact date of the construction of this deserted beauty is unknown, but it’s generally believed it was erected sometimes between 1838 and 1841, thanks to the contributions of donors. It’s built in the neo-Moorish style and is one of the most impressive buildings in the area. The synagogue’s organ was built by the local master, Leopold Wegenstein. This magnificent structure, with all its splendid details and long history, is unfortunately decaying and is in need of urgent renovation.