If You Could Visit Only One Synagogue per Eastern European Country... 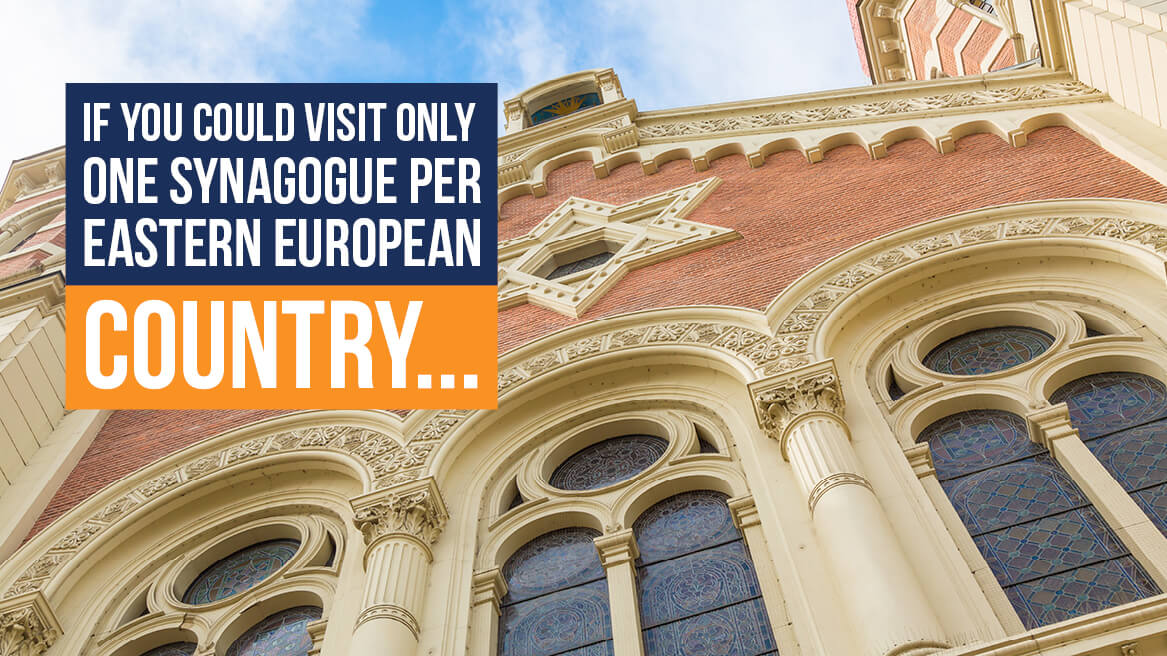 There are many countries in Eastern Europe and each boasts their own Jewish history and amazing architectural wonders that are their synagogues. So it’s overwhelmingly difficult to choose just one synagogue in each country as the most important one for the visitors to see. But we looked at five super-popular countries of Eastern Europe, and we wondered which ones we’d choose if it only had to be one in each capital. It’s impossible to define any of them as the most important one or the best one, but here are some of the many historically central synagogues in Eastern Europe.

The Jewish Quarter is Budapest’s liveliest neighborhood, filled with shops, cafes, art galleries, festivals, etc., and it’s experiencing a revival of Jewish culture. It is also a massively important area in the history of Hungarian Jews, especially in the context of WWII, as it was the site of the Jewish Ghetto. One of the must-visit places is the beautiful Dohány Street Synagogue – the largest synagogue in Europe. Completed in 1859 in the Moorish style, it can seat 3,000 people.

In Prague, we’ll choose to showcase a synagogue of immeasurable historical, architectural, and cultural value – the Pinkas Synagogue, the city’s second-oldest surviving structure of its kind. It’s located in Josefov, aka Jewish Quarter, and it’s one of the monuments that are a part of the Jewish Museum in Prague. The Pinkas Synagogue still serves its community and houses a Holocaust memorial.

The building, which combines elements of Gothic and Renaissance styles, houses an exhibition of pictures drawn by children during drawing lessons by painter Friedl Dicker-Brandeis, while they were in the Theresienstadt concentration camp. Dicker-Brandeis managed to hide the drawings, and 4,500 pictures were given to the Jewish Museum in Prague after the war. Most of the children and their teacher died in Auschwitz.

Once home to the largest Jewish community in the world, Poland is still home to the fantastic Nożyk Synagogue, the only surviving pre-war synagogue in Warsaw. Completed in 1902, it serves as the center of the local Jewish community and the communal institutions. It too was damaged during an air raid in 1939, it was a part of the Small Ghetto, and after 1941 the Germans used it as stables and a depot.

Our next stop is the Neue Synagoge (New Synagogue), another significant architectural monument and one of the few synagogues to survive Kristallnacht. It was completed in 1866, seating up to 3,000 people, as Berlin’s main synagogue. The synagogue was built in the eastern Moorish style and resembles the Alhambra. The building was badly damaged in World War II and much of it was demolished later.

It was reconstructed from the surviving elements, and in 1995, a small congregation was reestablished, with the entire neighborhood experiencing a revival since. Jewish services are now held again in the New Synagogue, while the building also houses offices and a museum. Next to it, you’ll find the Jewish Museum Berlin, which houses collections of Jewish art, historical artifacts, religious objects, 24,000 photographs, and letters and diaries of Holocaust victims.

When you go to the lovely Dubrovnik, first visit the Dubrovnik Synagogue – the world’s oldest Sephardic synagogue still in use and Europe’s second-oldest synagogue, established in 1352. You’ll find it in the Old Town, in a three-storied Baroque stone building, and it’s owned by the local Jewish community. Though suffering damage in the wars since, it has been reconstructed and reopened in 1997. It is still an active house of worship during holidays and for special occasions. It’s also a museum, housing old photos, important documents, and a number of greatly valuable items. These include a 13th-century Moorish carpet and a 13th or 14th-century Torah, both of which were probably brought from Spain after the expulsion.

We cheated a bit with this ‘tour’ – the fact is, whichever synagogue you choose to see, it’s the best one. This list is an inspiration or a starting point, showing you some of the world-renowned monuments. But no matter which synagogue you visit, it tells a crucial story of both its Jewish community and its country, so it’s impossible to make a mistake.