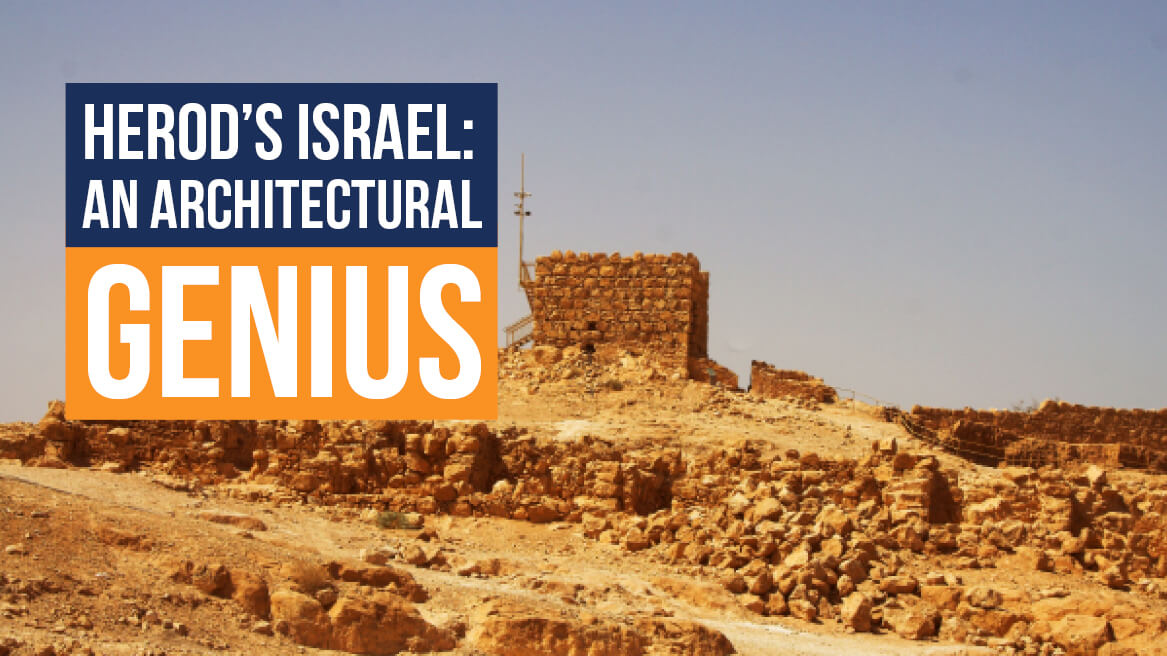 Herod the Great is a king known for many things, good and bad, but he had a great gift for architecture.

Herod’s family was forced to convert to Judaism in the 2nd century BCE, when the Hasmonean leader and Jewish high priest, John Hyrcanus, conquered Idumea. Herod's father, Antipater, was appointed commissioner of Judea by Julius Caesar. Later, Mark Antony, before his final meeting with Cleopatra, declared Herod King of Judea, which Herod ruled from 37 to 4 BCE. Herod is remembered in history as a moody, jealous, and cruel person. He killed his wife and the Hasmonean princess, Miriamne, her brother, his mother, as well as two of his sons.

And at the same time, he was one of the greatest builders of the ancient world, known for his recognizable style, elaborate ornamentation, frescoes and mosaic floors, and use of novel materials and methods. Herod built fortresses, palaces, theaters, hippodromes, and entire cities, even bringing water to the desert. His structures were grand and luxurious, and he’d always combine pragmatism and magnificence. Today, only a few structures remain intact, while a few more have been unearthed, and each is a gem well worth visiting.

Samaria is a name for a region of Israel and part of Palestine. Herod built a new city here, Sebaste, over the ruins of the capital of the northern Kingdom of Israel in 30 BCE. Among many structures, this city contained a temple-lined acropolis, a stadium, a colonnaded street, as well as a lower city, where John the Baptist is believed to have been buried. Numerous remains, objects, jewelry, etc., have been found on this site from a number of eras.

This is a famous stone fortress situated at the edge of the Judean desert, on an isolated plateau, 400 meters above the Dead Sea. Masada is an Israeli national park, a World Heritage Site, and a symbol of Jewish heroism. It's a magnificent 840-acre complex that contains a palace, spectacular terraces, a sophisticated water system, a storerooms complex, a synagogue, a mikveh, as well as Roman bathhouses with frescoes, and even public pools – in a desert.  Much of it was destroyed over time, but there are still breathtaking remains to be seen.

Jericho is possibly one of the world’s oldest inhabited cities and the city with the oldest known protective wall. More than 20 consecutive settlements have been excavated here, the first of which is 11,000 years old. Three Herodian winter palaces have been unearthed. One of these had a double swimming pool where Herod drowned Miriamne's brother, Aristobulus. We’ll see here the remains of the luxurious royal winter palaces – a complex of Hasmonean and Herodian buildings from the Second Temple period, which included pools, bathhouses, gardens, orchards, farms, and much more.

Some of Herod’s most significant contributions to Judea’s architecture are situated in Jerusalem. Until this very day, we can see the massive Herodian stones around the Temple Mount and at the Citadel. Herod reconstructed and enlarged the Second Temple, and built a grand Royal Portico. He placed retaining walls around the crest of the Temple Mount and created a 36-acre platform with many tiers of supportive arches, thus forming the largest temple enclosure of the age. Two celebrated structures stand on this platform today: the Dome of the Rock and Al-Aqsa Mosque. Today, we can find sections of the Temple Mount’s retaining walls at the Old City Wall and at the Western Wall, as well as the remains of Antonina fortress on the Via Dolorosa.

Herod built a new port-city for Augustus Caesar, equipped with lively markets, a hippodrome for horse and chariot racing, a 4,000-seat amphitheater, a temple to Augustus, a sewer system beneath Roman streets, a tunnel and a six-mile-long aqueduct to bring fresh water from Mount Carmel, and the impressive, world’s largest man-made harbor. We can see the parts of the mosaic floors and plastered walls of the theatre, which has been restored and is used yet again. We’ll also see Caesarea’s mosaic floors and parts of large halls situated around a pool, and an excavated stone vault.

Herod built Herodium and its awe-striking edifices at the place where he nearly lost his life in a battle in 40 BCE. Today, it consists of the remains of a large palace, a race track, service quarters, Roman bathhouse with frescoes and mosaics, and a massive building of unknown function – maybe Herod's mausoleum. There’s a pool next to it, almost double the size of today’s Olympic-size pools, while at sides of the hill, there’s a massive, round man-made crater, which, along with casement walls, surrounded Herod’s palace. Half of the crater was home to beautiful gardens.

For some, he’s a hero, for others a villain, and there’s no denying that this is a man who’s responsible for a number of horrific events. But no one can deny either that King Herod had an impressive architectural talent, and that he greatly contributed to the creation of some of the country’s and the region’s most significant structures. And 2,000 years after he reigned Judea, we can today visit the remains of the so-called Herodian structures across Israel.