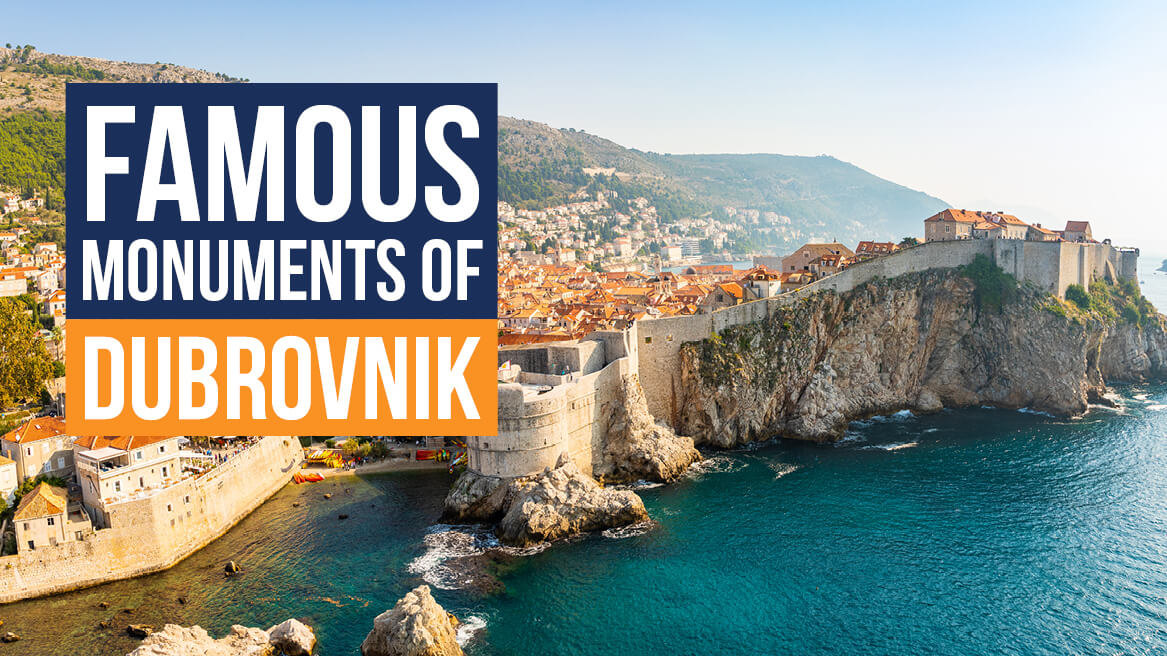 Dubrovnik is an old city by the Adriatic Sea that has seen many cultures live in it, make trade deals in it, develop it, and create in it some of the world’s most amazing pieces of art and architecture. These have with time become the city’s most popular, but also most beloved monuments. Let’s check out just some of the many famous sites to see on a tour of this Croatian city.

This Gothic-Renaissance masterpiece with Baroque elements is a definite must-see when in Dubrovnik. As we enter it, we do not only enter a museum, but a fascinating episode in Europe’s history. Once the site of a defense building in the early Middle Ages, the original structure was destroyed in the 1435 fire, and a new structure was erected by the famous Onofrio della Cava of Naples. With time and renovations, the architectural styles were merged harmoniously and even more exquisite ornamentation included. Here we observe the fine carvings, the ornate staircase, the bell in the atrium, and the ornaments sculpted by Pietro di Martino of Milan, among many other wonderful details.  The Rector's Palace was once the seat of the Rector of the Republic of Ragusa between the 14th and early 19th centuries, but it also served other functions throughout its long history, these being the seat of the Minor Council and the state administration, an armory, the powder magazine, the watch house, and a prison. Since 1872, the palace has been home to the History Department of the Museum of Dubrovnik.

Now we will visit two of the Dubrovnik’s oldest and most treasured churches. Designed by the architect Petar Andrijić from Korčula, construction of the St. Saviour Church started after a major earthquake in 1520, and it was completed in 1528. It was actually erected in gratitude that the city hadn’t suffered even greater destruction, as the inscription above the main entrance states. We can admire its nave with a Gothic-cross-ribbed vault, the Gothic lateral windows with the pointed arches, but also the many charming, recognizable Renaissance elements of the main façade. In 1667, Dubrovnik saw another earthquake which was devastating, taking thousands of lives and destroying the city. But the St. Saviour Church survived and stands today for us to see it in its full original impressiveness.

Soon after, we stand in front of another marvelous monument – the Baroque Church of St. Blaise, identified by medieval Slavs with the pagan god Veles, the patron saint of Dubrovnik. Built in 1715 by the Venetian architect Marino Gropelli on the foundations of the devastated Romanesque medieval church, the St. Blaise Church incorporates, among a myriad of other features, the richly decorated interior, the main altar in white and polychrome marble, a square nave with a ground plan shaped as an inscribed Greek cross, stairs leading to the portal adorned with statues of angels, and four Corinthian columns dividing the façade that has on its top three statues by Gropelli depicting Saint Blaise and personifications of Faith and Hope.

The last, but not the least, we go to see another pride of the locals, the majestic Walls of Dubrovnik – a series of defensive stone walls surrounding the city, never breached by the enemy and considered as one of the world’s greatest fortifications from the Middle Ages. The old city of Dubrovnik with a large section of the walls became a UNESCO World Heritage Site in 1979. The oldest systems of fortifications that surrounded the city was most likely wooden palisades. What we see today was for the most part constructed between the 12th and the 17th centuries, particularly in the 14th and the 15th centuries, with a number of additions, expansions and strengthening being done over the course of these centuries. The walls run an uninterrupted course of approximately 1,940 meters with a maximum height of about 25 meters.

The town has four city gates: two lead to the harbor and two with drawbridges lead to the mainland. However, two more gates were opened in the wall during the Austrian Empire rule. Furthermore, there are three forts within the walls, and two detached forts. To be more precise, the walls were reinforced by three circular and fourteen quadrangular towers, five bastions, two angular fortifications, and the large St. John's Fortress, while the land walls were also reinforced with one larger and nine smaller bastions, including the Fort Bokar, Europe’s oldest preserved fort of its kind. This brilliant defensive system, mostly built in double line and combined with a moat armed with 120 or more cannons, provided an excellent protection of the city, allowing it to develop and flourish for centuries.

Dubrovnik is one of Croatia’s most popular cities and, as you could see, rightfully so. It’s truly an Adriatic gem worthy of every tourist’s visit, and no matter which road you take in this old city, you’re bound to enter a page in its long, complex and intriguing history.