A Culinary Experience of Israel 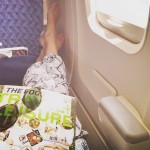 I’m a window seat flyer.  I love the peace and quiet of a night flight, surrounded by tufts of cotton painted pink in the setting sun.  What a sight to behold, gazing out into soft blue as all is hushed to darkness, then waking to that same glowing crimson ball as it rises, veiled in clouds, like a blazing black hole at the center of a tiny galaxy.

As we made our approach over Israel’s shoreline a little after noon, I peered to the left, ostrich-necked from the aisle of the middle row.  Squinting into the window’s haze I could not really see much at all.  A blinding swirl of browns and grays, greens and blues brought tears to my eyes. 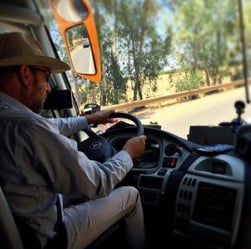 It would take 34 years for me to step foot into my distant past but only a few hours to feel comfortable in its present, even its uncertainty. Not that there was time to contemplate at first.  We hit the ground running, in our trusty orange coach with salty driver Adi at the wheel.

There was so much for these 19 journeymen to absorb, to learn, and the land of milk and honey burst over us like a dandelion in the breeze for the next nine days. The perfume of rose petals and paprika. The gentle brush of peach trees and the smell of volcanic earth and clay.  The baking sun on our hike over the Sea of Galilee, beads of sweat falling and soaked shirts clinging tight as we juggled a selfie. The rocky descent uncovered bushes of caper berries and mountain dwellings, some with squatters of the bovine persuasion, and chocolate milk cold packs and enough Bissli to make bellies sick with happiness at the bottom.

Hiking over the Sea of Galilee

We would marvel at the Jerusalem stone, its chiseled blocks, strong and uniform concealing the rippled, forgetful patterns of history and wink of the golden dome with its secrets.  In cascades of falling water in the desert and the salt of the ocean in the surf, then the sea, we felt this land. It consumed us, and we, it. The experience as guide Avi Hai eloquently noted was “more than an ordinary journey but also a good energy that touched everyone’s soul a little bit.”

Culture through Music and Food 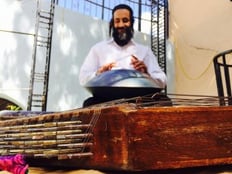 The music of santur, darbuka and pantam, ancient instruments that danced over us in the holy city of air, Tzfat.  Professor Shai Seltzer of the Judean hills with his scrawny cat and mischievous herd and life-altering grape leaf-wrapped goat cheese.  Israeli breakfast spreads. What to choose this morning?  The moving, unforgettable meal that talented Mike Solomonov and his chef friends conjured to honor his brother David and Golani army unit at organic farm Mitzpeh Hayamim.  Runs through the citrus grove. Sunflowers on fire in the late afternoon light of the hills.

And there was of course the food and the markets, each with new energy and life in people and stalls of spices and smoked fish, halva, mangoes and figs. The borekas do tell a souq’s story through filling, pastry, topping, and sauce.  In Jerusalem’s Machane Yehuda Market, enroute to watermelon fields in the desert to the south, we held specimens the size of beach balls, heavy with juice and the reddest, crispest flesh that you will ever eat. They became a breakfast staple, soaked in fresh cheese and curds speckled with nigella seed.

We could not live the experience fully without these things. They were everything.  We left Israel on a night flight.  Cloaked in black, Tel Aviv sparkled like fireflies, and I again burrowed into my middle row seat feeling incredibly thankful and knowing that next time, the view would be closer and more real from a window seat than ever before.

Bringing Israel Back to the States

Malawach with the customary grated tomato and chili topping

Returning to the States I spent many early, jetlagged mornings trying to wind down.  Like a hard stop between two meetings, getting my body to transition from my daily routine of one enriching activity to the next – and the absence of an entourage of IT-stricken explorers (what’s the hashtag again?) – became a proactive effort.  First, there was a need to release the energy. I was up before dawn, riding my bike into the sunrise, if only to exhaust myself.  Thankfully I succeeded after three days.  Plans were also immediately made to cook.  This is something I like to do and of course had been constantly thinking about as we traveled and ate.  Sabich, with its fried eggplant and hard boiled egg, pickles and tehina in pita! Yemeni mixed grill! Bulgarian kebabs!  And the scrolls of salatim, perfect hummus and laffa.  I yearned for the pungency of these distinctive flavors and ethnic specialties.  A dinner was assembled at my mother’s apartment a few blocks from mine in Coconut Grove, a waterfront village in Miami.  The meal would not recreate but reimagine flavors and stories, with a necessary valve to equalize the pressure, unfurl this acute, sensory experience – a group of people who call Israel home in one way or another.  Granny Smith apples to Golden Delicious.  It was a bit of a celebration as all guests had cause - big moves and big trips.  Israeli cuisine would be shared by all and enjoyed together in our common memory.

Any rhyme or reason would have been useless for a menu with the amount of wonderful dishes and ingredients I had tasted for the first time and wanted to bring into my home kitchen.  So, as usually does the trick, the answer was sheer instinct with rosé to guide me.  I focused on spices purchased at Tel Aviv's Carmel Market - za'atar, baharat and paprika – an essential trinity of Israeli cuisine.  Vegetables we constantly encountered in the market and on the table were definitely on the list.  First was cauliflower, which I’d roast hard and break up into florets to form the base of a salad with spicy green pepper tehina dressing inspired by schug, the Yemeni hot sauce condiment we couldn’t live without on the trip.  I stuffed roasted whole roasted eggplants with ground lamb, served with a side dish of grains and Bulgarian cheese.  No meal would be complete without pita and tehina to which mom’s friend Lily – who grew up in the Sabich neighborhood – added garlic and lemon juice. She also sprinkled some olive oil with her friend’s fresh za’atar.  It was the best thing on the table.

Just like the dinner, the recipes below are not exact rather tell the story of how the dishes came together.  Read them and take from them what you wish.  Maybe your Israeli story can be woven inside, too.

Roasted and Stuffed Eggplant and Zucchini 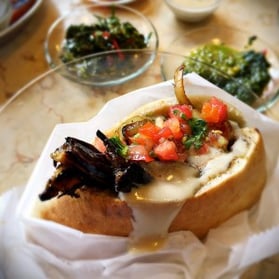 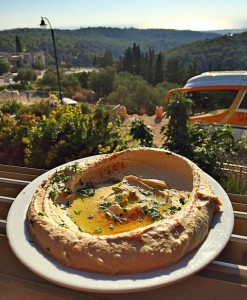 *A NOTE ON GRAINS: Bob's Red Mill heritage grains are killer. Use for best results! 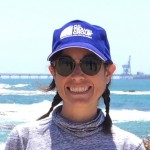 Jackie Sayet (35) is a writer and lover of food and travel based in Coconut Grove, Florida, a sunny village on Miami's Biscayne Bay waterfront. After time studying and working in Chicago, Florence, Italy, and New York City, she returned to her hometown to supervise brand/culture integration for advertising agency Crispin Porter + Bogusky and cover restaurants and food for Miami New Times. http://www.giltravel.com/blog/culinary-experience-israel/Since 2009, she has led James Beard Award winning chef Michael Schwartz's marketing and public relations as Brand Director of  The Genuine Hospitality Group.  Follow her @jackiesayet on Instagram (#Manuchefwitz for group photo album), her favorite social medium, and Schwartz's restaurants on their blog thegenuinekitchen.com and @MGFD_MIA, @thecypressroom and @harryspizzeria.