Celebrating Easter in Russia: Things You Should Know 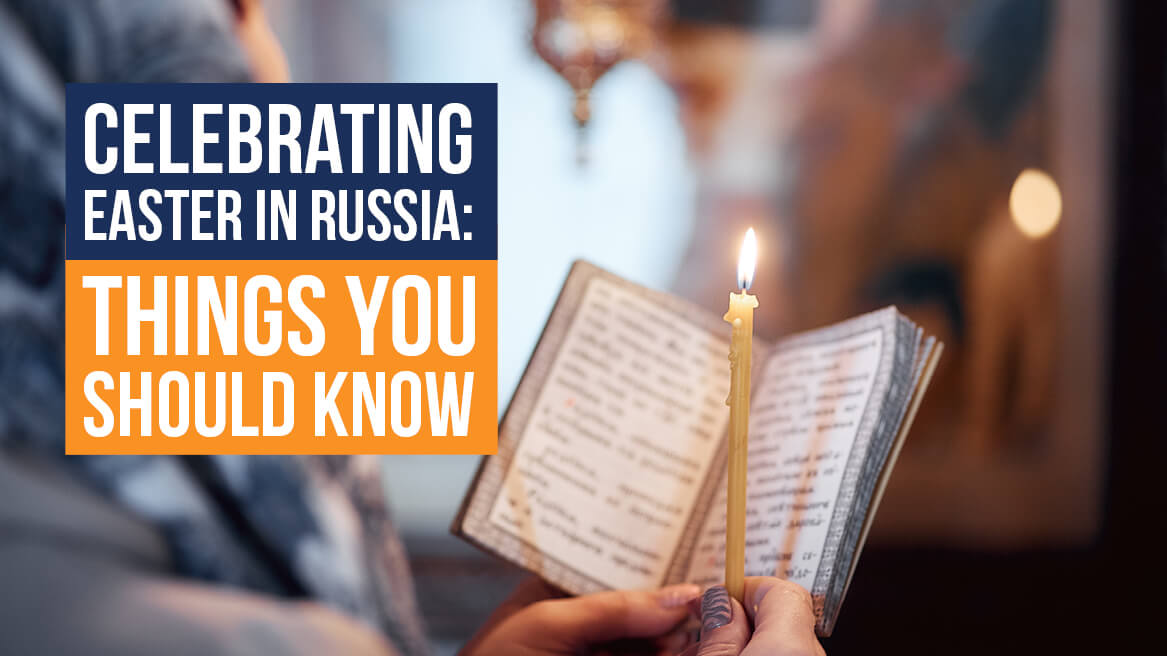 Spring is finally here. And with Spring, comes Easter - a time to commemorate the resurrection of Jesus, as well as play traditional games and have a lot of fun painting eggs. However, celebrating Easter is not the same all across the globe. As you know, there are two Easters in the world, observed at different times: the Eastern Church Easter and the Western Church Easter. Countries are like families, and each brings something of their own to the feast.

This time, we’ll take a look at how Easter is traditionally celebrated in Russia, the country where some 0.5% of the population celebrates Catholic Easter, while the majority of the people wait a few days longer for Orthodox Easter to start.

Orthodox Easter, or Pascha, is barely ever celebrated at the same time as Catholic Easter. Eastern and Western churches don’t base their calculations for the date of this holiday on the same calendar. Basically, the Eastern or Orthodox Church (such as Greek, Russian, Serbian) uses the Gregorian calendar (the one used by the majority of the world) to see when Easter is. On the other hand, the Western Church (including Protestants and Catholics) uses the Julian calendar.  From this point, each church sets out to see when the first Sunday that comes after the first full moon that follows the vernal equinox is.

This means that they first must calculate on which date the vernal equinox falls. Orthodox Christians find this date connected to the astronomical full moon, while Catholics use the ecclesiastical full moon. If the full moon happens on a Sunday, then Easter is observed the following Sunday. This is why Orthodox Easter follows Catholic Easter by several days. This year, Catholics will observe Easter on Sunday, April 12, while Orthodox Christians will observe it eight days later, on Sunday, April 20.

You’ll find many traditions connected to Lent and church services in Russia. An essential one for any Orthodox Christian is Forgiveness Sunday. It’s a very important day for the community, and people can be heard asking each other - those closest to them, family members, friends, and neighbors - for forgiveness. This way, each is reminded of the great significance that forgiveness and reconciliation play in the lives of each individual and the society as a whole.

For forty days, people can’t have any eggs, meat, dairy, fish, oil, and alcohol. However, certain foods are allowed on certain days during the fast. Another major difference between the Western and Eastern Easters are the church services. Interestingly, even the churches themselves look different. The services in Russia tend to be longer, while the Easter Liturgy is among the most important ones of the year. Starting on Saturday, the holiday is observed with two services, with prayers and psalms of repentance read aloud, while on Easter day, there’s a lot of joyful singing in celebration of Jesus’ resurrection.

Once Easter finally comes, a person will greet their fellow Russian with “Христос воскрес!” (Christ is risen!), and they will happily reply “Воистину воскрес!” (In truth He is risen!). Interestingly, Easter bunnies and chocolate eggs do not exist in Pascha. They’re simply not a thing. However once the fast is over, it’s time for the feast to start. There’s traditional and mouth-watering dishes aplenty, nicely placed on beautifully decorated tables, with spring flowers spreading their sweet scent throughout the house. A major ritual is painting eggs, usually in red, as it symbolizes resurrection, new life, and Jesus’s blood. Other traditional foods traditionally eaten are Paskha, a rich and sweet cheese dessert, and Kulich or Easter cake, a freshly baked bread with icing and letters “XB” for “Христос воскрес”.  Both of these dishes, along with other foods, are taken to church in a basket to be blessed.

Instead of egg hunts, Russians play cracking eggs, the goal being to crack the other person’s egg, symbolizing new life. They also have egg rolling, with people rolling their red eggs down a grassy hill. Therefore, egg painting and egg games are major events. The story goes that Mary Magdalene came to Emperor Tiberius to tell him that Christ had resurrected. As a gift, she brought an egg. The Emperor didn’t believe her, questioning how is it possible for a person to rise from the dead. “It’s as impossible as for this egg to turn red,” he exclaimed. As he uttered those words, the egg turned red.

As you see, there are many similarities between these two Easters, but also many interesting differences. Add to these different cultural traditions from country to country, and you have a truly wonderful specter of customs, making Easter in each country, each city, and each family all the more special.