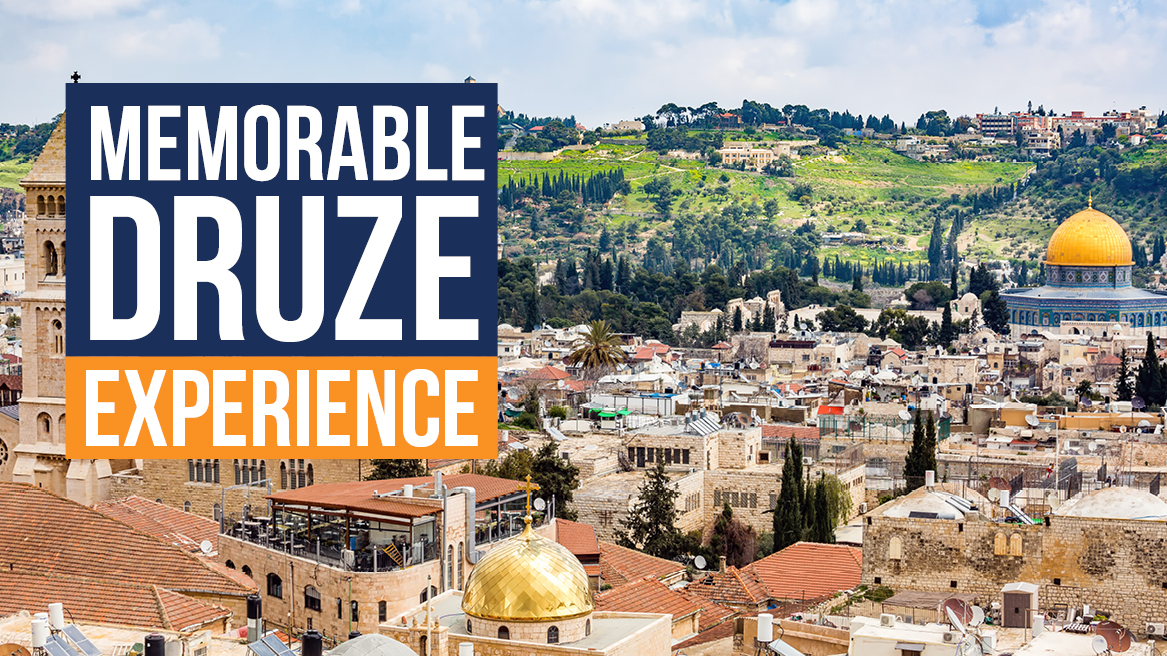 The Druze are a minority group in Israel with a rich culture, history and culinary repertoire .  We’ll tell you more about the history, culture, villages, and amazing food so that we can meet these people and get to know their story through this written ‘journey’ across Israel.

Druze are a unique ethnic and religious minority amongst Arab citizens in Israel. After Syria and Lebanon, Israel has the third-largest Druze community, with approximately 143,000 members. They speak Arabic, and though their religion originated from Ismaili Islam, they’re generally not considered Muslims. There are several charming and traditional villages, as well as modern multicultural towns inhabited by the hospitable Druze. Most of these are located in the north of the country, in Upper and Lower Galilee, Mount Carmel, and the Golan Heights, and each is filled with scenic sites and fragrant, colorful markets.

As said, there are several lovely Druze villages in Israel, which are homes to a number of historical and natural sites. In or near Daliyat El Karmel, for example, there’s the Muhraqa Monastery, the Carmel Center for Druze Heritage, as well as the Garden of the Mothers that symbolizes the sisterhood of Druze, Muslim, Jewish, and Christian women from the Women’s Interfaith Network. The splendid Mount Carmel National Park is also nearby, with dedicated nature reserves and over 250 archaeological sites, while the Caves of Nahal Me’arot / Wadi el-Mughara in the Carmel mountain range are also a must-visit site.

We’re far from over. In Isfiya village, people live next to the excavated remains of the 5th-century Jewish settlement of Husifah, including buildings, a synagogue, mosaic floors, gold coins from the Roman period, ceramics, and coins from the 2nd-4th centuries CE. Further, in Maghar, a quarry was excavated, along with pottery and architectural remnants from the Roman period. Several archeological remains were also uncovered in Sajur Druze village – tombs from the Roman and Byzantine periods, another from the end of the 2nd century CE, and one dating to the 1st–2nd centuries CE.

Quite a few Druze families run welcoming tzimmerim (bed-and-breakfast), usually situated in the most scenic parts of a village with breath-taking views of, for example, the Sea of Galilee. They offer traditional Druze breakfast, and some even have a swimming pool. In the foothills of Hermon Mountain, there’s an inn with a buffet breakfast, spa, outdoor pool, and an incredible mountain view.

Markets are centers of every village and town, with stands selling traditional Druze and Arab delicacies, including fragrant spices, homemade honey, fig jam, pickled veggies, homegrown fruits and veggies, fresh sheep milk, grape leaves, labneh (strained yogurt) balls in olive oil, and much more. Visitors of Abu Jabel’s knafeh factory in Majdal Shams can join a workshop and make this yummy kadaif-cheese-pistachio Arab pastry, while those visiting Aya Natural Cosmetics visitors’ center in Beit Jann get to experience or buy skincare products and soaps based on high-quality local olive oil and herbs from the Galilean hills.

Another major part of the Druze hospitality, which deserves a paragraph of its own, is the food. The foundation of the Druze kitchen is to cook with local and seasonal ingredients. Though the food is quite similar to Arab cuisine, each family uses their own recipes that have been passed on for generations. Also, each dish is made slightly differently from region to region. Some of the must-tries include savory stuffed pastry called fatayer; rice and lentil dish called mujaddara; grape leaves stuffed with rice; rice and meat dish maqluba; bulgur patties stuffed with meat known as kubbeh, and much more.

There are numerous authentic Druze restaurants in the Northern and Haifa districts. Also, travelers shouldn’t miss a chance to try traditional delicacies on the go. They just need to follow the signs along the roads leading to tasty pitas, fresh olive oils, spices, and many finger-licking foods. Finally, mate tea is a very important part of Druze social tradition. The hosts and guests can enjoy a cup of mate while talking about Druze culture.

And for our final stop at this Druze ‘journey’, we meet Fatma Shanan – a Druze painter based in Julis in the Upper Galilee, and the recipient of numerous awards. Her paintings represent her Druze culture, focusing on realistic depictions of village life, such as olive harvest, authentic and colorful patterned rugs, as well as self-portraits. Her works are also part of the collection of the Israel Museum in Jerusalem.