5 Places to Visit on a Day Trip from Prague 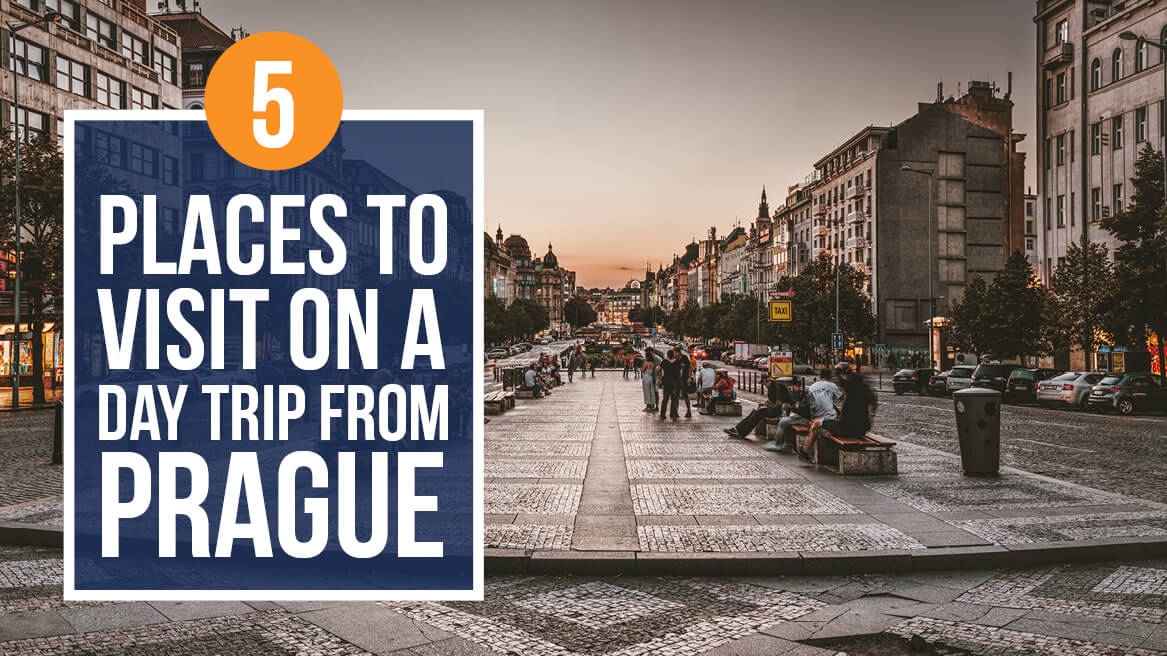 Prague can be a fantastic starting point for some amazing adventures and sightseeing. After visiting many famous sites in this beautiful city, it is time to go wandering beyond Prague. Perhaps you want to walk through medieval streets, visit historic castles and old churches, or you wish to explore museums and beautiful sceneries – all this and much more awaits just a short drive away from the Czech capital. You can even go for a day trip to other wonderful European cities, such as Vienna or Dresden. Here are some wonderful sites very close to Prague you shouldn’t miss while on an escorted tour to Eastern Europe.

1. Kroměříž Palace and the Titan Gallery

This UNESCO World Heritage Site is a must-see! Kroměříž Palace was originally built in 1686 as a Bishop’s palace, but today this early Baroque style structure is considered to be the most magnificent and luxurious palace in the entire Czech Republic. In the Thirty Years’ War, the edifice was severely damaged and had to be almost completely rebuilt. Now, it is home to the world-famous library that houses more than 50,000 titles, as well as a musical archive that includes the original scores by Mozart and Haydn. You can’t visit the palace without exploring the large palace grounds and seeing the wonderful Titan Gallery – one of the country’s largest art collections with works by Anthony van Dyck, Jan and Pieter Brueghel, and Jacopo Bassano, as well as numerous celebrated religious paintings.

Just 50 miles from Prague, you’ll find this picturesque 13th-century mining town with a myriad of attractions. It’s a place for pleasant walks through its fairy-tale-like streets and for adventurous explorations. First, visit the famous Sedlec Ossuary, a small Roman Catholic Chapel which only uses human bones for interior decoration. Though it sounds strange, the intent behind is honorable. The chandelier made entirely of human bones, for example, commemorates people who died during the Black Death and the Hussite Wars in the early 15th century. At least one bone of every person from the estimated 70,000 who died during this time was used for the interior. After that, visit St. Barbara’s Church, built in the style of a Cathedral, with its gorgeous vaulted ceiling and ornate frescoes, then go on an adventurous tour of the medieval silver mine. 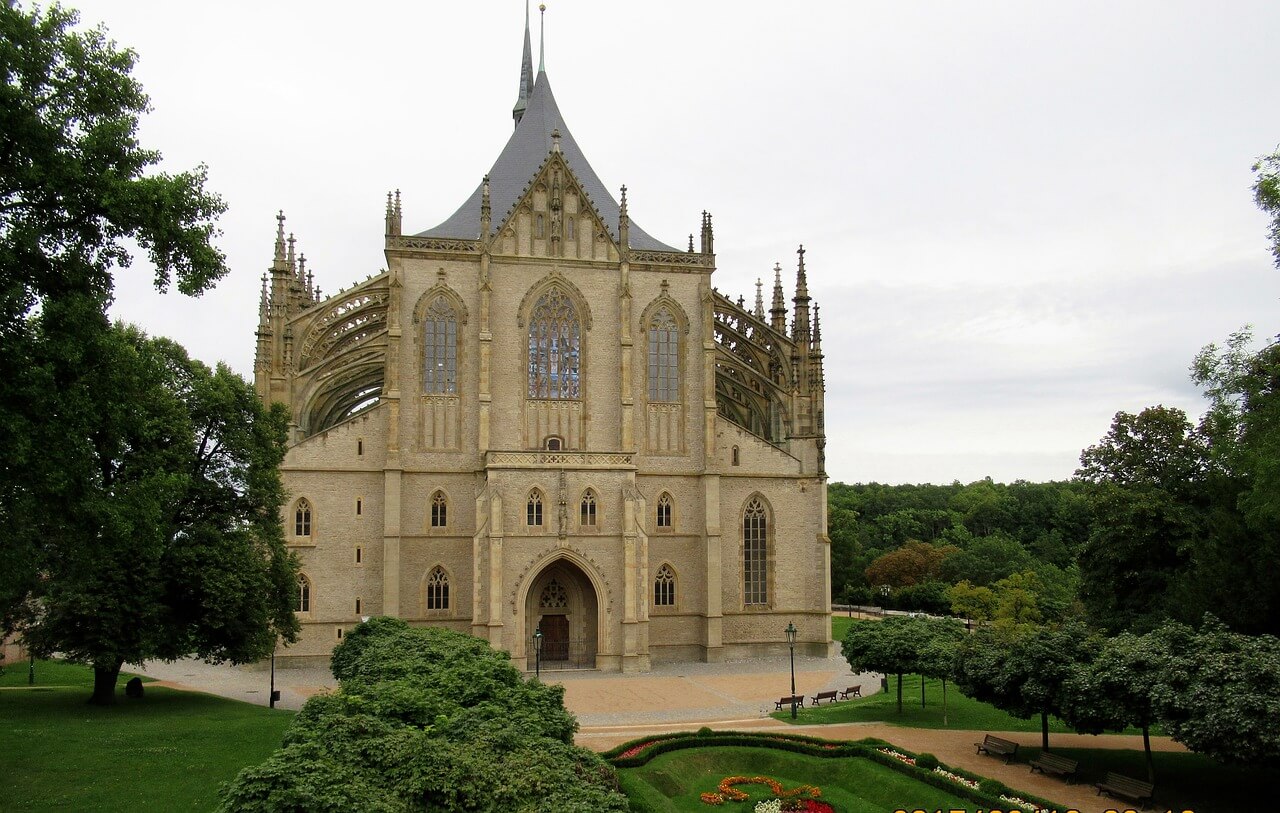 Founded in 1358, Karlovy Vary, or Karlsbad, is a town of rich history, brilliant architecture, and wonderful hot springs. First, take a walk through the picturesque streets of the town and enjoy the imaginative architecture. Then, visit the relaxing Hot Spring Colonnade spa center where a geyser yields ca 530 gallons of water every minute, spurting to the height of up to 7.5 miles, and the popular Underground Spring to explore the cave-like area for pumping, distribution, and control of thermal spring water with its many attractions.

After that, go to the Moser Museum to witness the history of the brilliant Moser glasswork through more than a thousand exhibits, and see the glassmakers making the Moser crystal too. Enjoy the view of the entire town from the fantastic Diana Observation Tower, and lastly quench your thirst with a glass of mineral water directly from a spring.

About 2.5 hours from Prague, resting on the banks of the Vltava River, you’ll find the splendid Český Krumlov – a lively old city and a World Heritage Site, where people leisurely walk about, enjoy life, have a cup of coffee, a bear, or a tasty meal. One of its world-famous attractions is the historic center with its old, labyrinth-like streets, which remains intact since the Middle Ages. While there, you must visit the Český Krumlov Castle – a magnificent complex of structures and palaces, five courts, and a grand Rococo-style garden, all situated on a hill overlooking the Vltava. For your next stop, go to the stunning 15th-century St. Vitus Church. You can also enjoy the amazing views from its top. Another popular attraction is the Museum of Torture with its exhibit of instruments of torture and punishment.

Not more than an hour from Prague, you’ll find yourself in the beautiful and serene Křivoklát Castle, resting on a forested hill in the Berounka River Valley. Built in the 12th century in Gothic style, it was originally a royal residence. Amazingly, its interior remains intact, and you can still walk through its hallways, see its art, paintings, extensive library, and the elaborate carvings in the Royal Chapel of angels holding instruments of torture, as this fairy-tale-like castle once housed political prisoners. Only forty minutes away from Prague, you’ll find another magnificent site – Karlštejn Castle. Built in the mid-14th century, this large Gothic castle used to be Emperor Charles IV’s place for safekeeping the many royal treasures. You can see the emperor’s and his knights’ private quarters, chambers housing the crown, the jewels of the Holy Roman Empire, and other valuables, and many other things you might’ve thought existed only in European fairy tales.