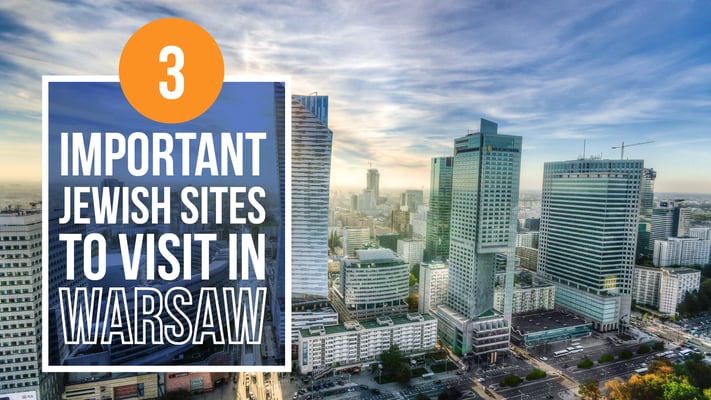 Jewish communities called Poland their home for more than a millennium. Once known as Paradisus Iudaeorum (Latin for “Paradise of the Jews”), Poland was home to the largest Jewish community in the world. 1772, however, brought The First Partition of Poland, religious conflicts, and the persecution of Jews.

During the German occupation of Poland, the Polish Jewish community was nearly obliterated. 1943 saw the Warsaw Ghetto Uprising – an act of Jewish resistance against the deportation of the remaining Ghetto population to the Treblinka extermination camp. The revolt was suppressed and the district demolished. On its site now stands the POLIN Museum of the History of Polish Jews that cherishes Jewish history and culture in Poland. The Museum is open for visitors every day, except Tuesdays and holidays.

Since the fall of communism, the Polish Jewish community has been blooming, thanks to the work of synagogues and museums, the annual Jewish Culture Festival, and new study programmes at Polish high schools and universities.

Some of the most significant sites that people ought to visit during their Eastern European tours include Warsaw Ghetto Walls, Monument to the Ghetto Heroes, and Nozyk Synagogue.

Completed in 1902, the Nozyk Synagogue is the only surviving synagogue in the Polish capital. Before WWII, however, it was one of the five largest Jewish houses of worship in Warsaw. Located at 6 Twarda Street in downtown Warsaw, this Orthodox synagogue is a rectangular two-story structure constructed in the neo-Romanesque style with prominent elements of Byzantine, Romanesque, and Moorish ornamentation.

In 1941, Jews were not allowed to pray in this synagogue, and Nazis started using the structure as a horse stable and a fodder storehouse. Severely damaged, it was repaired in the late 1940s just enough to be reopened for public worship. The fully restored synagogue was officially opened on the 50th anniversary of the Warsaw Ghetto Uprising, in 1983.

There is no longer a Jewish district in Warsaw today, but most of the communal institutions are centred around the Nożyk Synagogue, as is the tradition. It is home to many Jewish organizations, including the Warsaw Jewish Commune. The synagogue serves the small Jewish community of Warsaw for whom services are held daily. It also provides lectures and organises joint celebrations of the Sabbath and other Jewish holidays.

Monument to the Ghetto Heroes

In the middle of a large square in the centre of Muranow, between Zamenhofa and Karmelicka streets, opposite the POLIN Museum, stands the Ghetto Heroes Monument, which commemorates the Warsaw Ghetto Uprising of 1943 and thousands of people who lost their lives. Designed by Leon Suzin and sculpted by Nathan Rapoport in 1948, the 11 meter tall monument was unveiled on the fifth anniversary of the Uprising. Ironically, stone used in the monument had been brought to Warsaw by the Nazis in order to build a victory tower. There is an exact copy of the monument in Yad Vashem, Israel.

The front side of the monument, entitled “The Fight”, signifies the determination of people fighting the enemy. Its bronze relief depicts men, women, and children armed with grenades and bottles of petrol, while the central figure represents Mordechaj Anielewicz, the leader of the Uprising. The back side of the monument, entitled “March to Destruction”, depicts the anguish of women, children, and the elderly, as they march to their deaths.

Near this monument stands a memorial tablet to the Ghetto Heroes, revealed in 1946, as well as the statue of Jan Karski, a Polish resistance fighter.

The monument contains an inscription in Polish, Yiddish, and Hebrew, which reads: “The Jewish People in honour of its fighters and martyrs”.

In 1940, to create the Warsaw Ghetto – the largest Jewish ghetto in Europe during WWII – the German authorities built 18km (11mi.) of brick walls around the Jewish quarter in the Muranów neighbourhood. Being completely closed to outsiders, over 400,000 Jews were imprisoned there. At least 240,000 people were deported to Nazi extermination camps, while thousands of others were killed in the Ghetto.

The wall was torn down in 1943, save for one short section which is the only part of the original wall that stands today. Located at ul.Zlota 60/62, the remaining section is about 3m (10ft) high – taller than most sections because it was connecting two buildings. There is a map on the wall showing the Ghetto divided in two. On the northern border is where the Umschlagplatz (the place where people were assembled for deportation to death camps) and Mila 18 (a bunker during the Warsaw Ghetto Uprising) were situated. The bottom sector is where the Nozyk Synagogue stands to this day. Visitors can also see the stones that mark the former location of the wall, carrying the inscription that reads: “Tu byl mur getta” / “Here was the wall of the ghetto”.